Japan is a bit of an overwhelming experience in many ways, and many of those ways are hard to pin down. So rather than just give the tourist wrap, I might try picking on a few things that are startlingly different from home sweet home. And the first of these is manners.

There is no graffiti in Kyoto. I haven’t seen any graffiti anywhere, even out of the window of the Shinkansen, the bullet train, in the seedier districts, even in public toilets. Not even a tiny marker pen mark on a hidden stone somewhere. There’s no litter either, even cigarette butts are hardly in evidence. What do the youf here do to rebel?

Everybody rides bikes in Kyoto, it really is a very bike friendly city, and the bike riding illustrates many of the things I’ve noticed. First, you park your bike outside your house. You don’t bother locking it, because people don’t pinch stuff, like graffiti it’s rude. I’ve seen people park their electric car neatly outside a 7-11 equivalent and leave the motor running and the keys in the ignition while they pick up some of the many mystifying products within. When riding a bike along a crowded footpath you do so considerately, weaving among the pedestrians and never once clicking your teeth or rolling your eyes when an elderly man sidesteps in front of you. You patiently wait for him to get back on track, then quietly pass him. When negotiating the excellent bus system, we managed to purchase day passes for a family of five with handfuls of change from a non English speaking bus driver on multiple occasions as people waited to exit behind us (that was the system) and there was never a sigh or a cross look from the driver or the waiting passengers. They don’t even mind when you pay with the equivalent of a hundred dollar bill for a packet of grape sweets.

They seem to employ a lot of public officials. There are the ones who are armed with light sabres whose job it is to enforce the traffic lights at busy intersections, as if anyone would be rude enough to disobey them. There are ones at train stations whose sole occupation appears to be to fill in a fancy uniform and say “arigatou gozaimusu” to as many people as possible. This is far and away the most common phrase in the Japanese language. It’s Thank You Very Much and is used in almost every sentence, along with Kudasai, which is Please. I did hear a mother reprimand her loud child with a sharp “Kudasai!”, so that’s gone into the lexicon and I have had occasion to use it on the Horror a few times, to polite crowd approval. There are signs everywhere exhorting good behaviour, like this one in one of the plentiful public toilets.

Google Translate tells me that all that text just says Don’t Graffiti, but fairly ornately and politely.

Even the monkeys are polite. They stick to their mountain, they eat the approved food at the approved place, they certainly don’t solicit or harass the tourists, nor do they move down the mountain to go through rubbish bins. 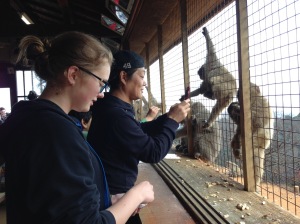 How do you get a society to behave so nicely? Is it Zen Buddhism? Are delinquents quietly removed and shot? I can’t work it out.

On the other hand, manners don’t seem to extend to welcoming the foreign tourist to any great extent. I’m not a cultural imperialist, and I certainly don’t expect most people to have any English, but surely it wouldn’t be a bad idea for the main tourist booth at Kyoto Station to have the odd bit of English? Or the various information desks at the major tourist spots? It certainly helps that they use Arabic numerals, and most of the written train and bus information is also provided (properly) in English. All restaurant menus are either helpfully pictorial or have startlingly lifelike plastic replicas to choose from. But they just don’t seem to be interested in the speaking English themselves. I think most of their non public transport English translation is provided by an old version of Google Translate. 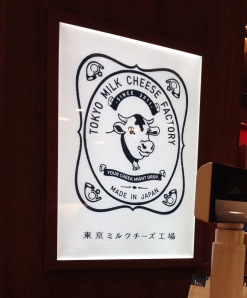 I feel like going around with a marker pen and correcting it all, but who’s got the time. Anyway, give Google Translate, my new favourite app, another couple of years and it won’t be a problem any more.

So food. I’m rather enjoying going into shops and just wondering what the hell some of this stuff is. Our guide book says that the authors have lived in Japan for decades, yet when they pop into the Nishiki markets, 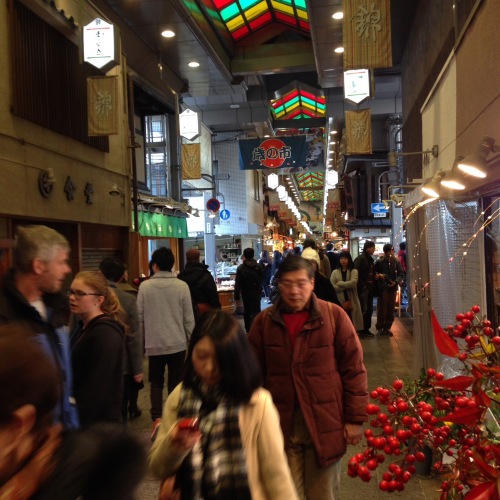 They don’t mind a bit of seafood on a stick.

But the main issue for us Westerners is that it’s just not obvious what most of the food will taste like, because the Japanese seem to like all the flavours and don’t much care in what order they are. We bought what we thought were rice crackers in the rice cracker section of the supermarket and they turned out to be coated in brown sugar. We’d enjoyed some white buns filled with red bean paste at the markets, so Thermomix sister bought an assortment of these to have at home. Some of them turned out to be filled with meat, delicious once one got over the surprise. And some turned out to be not filled with anything at all, and also not cooked. They were possibly called motchi, were a New Year’s delicacy, were designed to be grilled, and nineteen people had choked to death on them this very New Year’s Eve. Not my favourite.

We popped into a local bar, called Snobby’s, not twenty metres from the house we were staying at in Kyoto to try some of the local sake. It was delicious, far better than the rubbish you get at Japanese restaurants at home, smooth and not too alcoholic. We were served with it, by the extremely hospitable non English speaking barkeep, an array of snacks. Rice crackers, good. Macadamia nuts in the shell, OK, plausible. Thermomix sister was offered what turned out to be some form of extremely chewy nougat, not so great with sake, though the sake did help in eventually dissolving it off her teeth. And I was offered a small roll of very effervescent sweets which were slightly reminiscent of trough lolly. Then there was a plate of tiny fish and another of what could have been pickled seaweed which was rather good. Not like the plate of God knows what we were served with a beer at our most recent train station whose name escapes me.

I was given the impression that it was a local delicacy, large packets of it were being sold at the counter. I did taste it. “What do you do with it?”, asked the husband on his return from his bus transfer recce. “Bury it in an unmarked grave”, was my advice. Took the rest of the beer and a roll of grape Mentos to get rid of the flavour.

My favourite new flavours are red bean – adzuki, and matcha, or green tea. I must find sources for these at home. I know you can get matcha Kit Kats at the Asian market at Birkenhead Point. Gourmet Kit Kats appear to be a thing here. 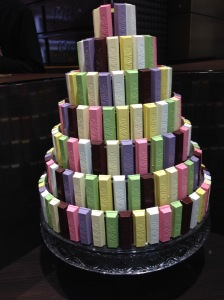 You could get a packet of mixed fruit Kit Kats in the deli at Daimaru for about twenty five bucks a pop. I’m sticking to the matcha. Just today I discovered matcha au lait. It looks like poison, bright green and frothy, I’ll have to get you a photo of it, and I’m going to have to have one every day.

The Horror has been a bit disappointed to find that the Japanese don’t actually live on cucumber sushi, but he has managed to get a reasonable amount of it into him, principally from train stations and airports where the food is astonishingly good. The snack food available here puts Western countries to shame, and explains why we’ve only actually seen one morbidly obese Japanese person here. Onigiri, a rice triangle wrapped in seaweed with a tiny splodge of flavour in the middle, is my favourite food on the move, and generally costs about $1.50. A bowl of noodles in broth is standard lunch. The chicken nuggets are amazing, even the ones in packets in the frozen section of the supermarket. Everything is in tiny servings in separate plates of bowls and beautifully presented.

I’m still enjoying being bewildered by almost everything I see in a shop. Muffet went into a chemist to find some nail polish remover, and even though she can read some kanji, she retired defeated. Almost all of the packets and bottles were illustrated by a line drawing of a person with some part of them exploding. It wasn’t clear if the contents were to relieve the explosions in an internal or external fashion, and was an exploding neck indicative of muscle strain or tonsillitis? I’m sure it’s not polite to spend time in shops continually pointing and laughing, but I’m not from around here.

I shall leave you with three last foods to ponder. Noodles on a bun.

And a bottle of tiny fish.

I’ll tell you all about Kyoto next time, once I’ve gathered my thoughts.