We’ve had the full Japanese family skiing holiday experience. And it was different from the Australian experience in a number of key areas.

First, the resort. There was no drying area – you just brush the snow from your equipment and clothing as you come in and bung it in your ski locker – one per room. There was no roaring log fire, that was sad. There was really no common area, there were a couple of chairs and a dilapidated lounge near reception where the wifi was, and the kids spent a bit of time there. It wasn’t really clear where the normal families were hanging out. 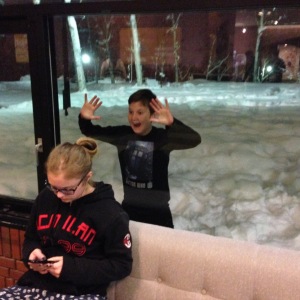 There was a gift shop which was a constant source of amazement to me. I couldn’t get enough of it. Every time I went in there there was stuff that I hadn’t noticed before and couldn’t quite believe. There was a bit of a hint as to what some families were doing for lunch, a small selection of freeze dried just add boiling water to the bowl meals. There were the local Hokkaido specialties of lavender, rockmelon and potatoes in many forms. Lavender soap (which is currently perfuming my bag).But also lavender chocolate. Dried rockmelon, also rockmelon chocolate, rockmelon caramel, little charms on strings in the shape of a rockmelon with an inexplicable bear’s head sticking out of it. Huge gift boxes of potato chips, some of which were chocolate coated. 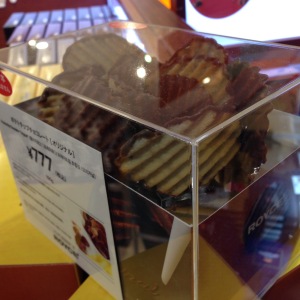 They made a bit of an attempt to speak English, but everything was so well organised and clear that it really wasn’t necessary. And sometimes the attempts weren’t terribly helpful. 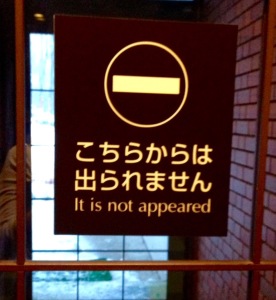 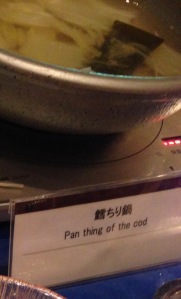 And, of course, the snow. It was dry and there was a lot of it. So very very much of it. 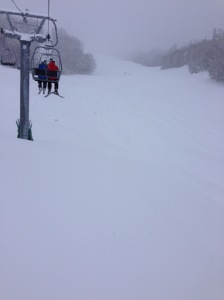 That was just one part of the first lift. The runs were so long you’d be thinking “are we there yet?”. The snow was so powdery that you’d see parents digging their kids out of the snow at the side of the run, only the tops of their helmets visible. I had a fall as I went around a chunk of mountain and found myself unexpectedly upside down, helmet in the snow.
We stopped every day for morning tea and thawing out at a little unmanned hut which would be undoubtedly vandalised out of existence in Australia. 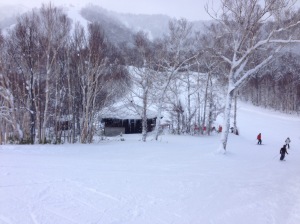 It was warm, had toilets and the ubiquitous drink vending machines. Lunch was at the gondola station, we abandoned New Furano on the other side of the mountain as being a bit too adventurous and it was also only accessed by a lift that the Moose dubbed the Rigor Mortis. I’m sure that the shovel by the side of the lifty on the other side was for prising the frozen corpses out of the lift and hoiking them into the woods. It was very scenic though. Because we’re creatures of habit we always had the same thing for lunch, and we discovered how to say it in Japanese. Jun-ya Ra-men. Junior ramen. You poked your money into a machine and chose your meal from the buttons, no chance to ask for no pork or gluten free. Lucky that we love ramen. You’d get a numbered ticket that you give to the nice ladies at the other end of the room and in due course your number would be read out, they’d mark on the ticket if the number was to be read out in English. 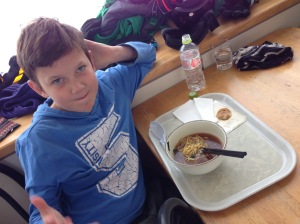 It did snow on us every single day except for the first and the morning of the last day, but it wasn’t like the kind of snow you get at Charlotte’s Pass, ie a raging blizzard. It was fairy tale snow that gently drifted down to turn you into a snowman on the chairlift and never ever melted down your neck. It reduce the visibility a little and was a little surprising when a flake got sucked up your nose when you were zipping through the forest, but certainly not anything to be concerned about. -10 degrees was certainly a littler colder than we were used to, but we got the hang of under gloves and scarves and stopping regularly to check that we still had all of our toes.

And, of course, the black runs are different. Not that I’d know from personal experience, but apparently in Australia they are very steep and studded with ice and rocks. Here they are very steep and absolutely full of powder, making it very easy to  lose your skis and do an accidental full somersault if you’re sixteen, resulting in a rousing cheer from watching snowboarders, or lose your skis and pop a calf muscle if you’re somewhat older, resulting in a couple of days of rest, ice, and elevation. Yes, that is supposed to include compression, but the resort first aid kit consisted of some gauze, band aids, antiseptic, and a heart defibrillator and nothing in between.

I do wonder what the experience would have been like in Niseko, where they are a bit more accommodating to Australian tastes, but I would thoroughly recommend the Furano experience. The husband doesn’t though, even though he managed to find a compression thing at the airport at Sapporo, but I think he’s just taking it a little too personally. Maybe I could persuade him to stay at New Furano next time, where they have a chairlift with a hood that stays open until 7.30pm. Not that I want to accept that challenge…