I’m settling into the lair rather nicely, I’m finding very specific spots for my extremely wide collection of bits and pieces, and yet there was something missing. A something that loomed larger and larger in my fevered brain until it became a necessity and an urgent one at that.

Since I’ve been back from Turkey my time has been consumed with restocking the larder with muesli bars, choc chip biscuits, vanilla and cinnamon biscuits, jam slice, fruit toast, ANZAC biscuits, driving the children about, and working. Two weeks full time, which was probably a lot easier than driving the children around during the holidays, they just had to put up with a fortnight of watching TV and playing computer games, the poor dears. I teach at a university, so any amount of work that I do inevitably results in assignments or exams to mark. The course that I just taught results in large assignments, twenty four page assignments, and I have twelve of them to mark. It is therefore obvious to the meanest intelligence that I must have somewhere comfortable to sit while marking. You know about my white painted wooden chair, that is only good for about half an hour’s sitting before I lose all sensation in my lower limbs. You also know about the world’s most comfortable chair that hangs on our back verandah, but the weather is currently such that I’d have to wear ski gloves to have operational fingers, and that’s no good for typing the multiple exclamation marks that these assignments will gather in their comments section. What I needed was a beanbag.

I haven’t had a beanbag in years, mainly because it was a personality quirk of my first cat, Snoopy, to pee in them. He then taught my second cat, Linus, that this was the required behaviour of any civilised cat. I persisted with the washing and spraying for a while and eventually gave up altogether. Linus has been dead for over a year now, and the latest cat, Stormaggedon, has been very good in the toileting department, so it’s time to risk it again.

I don’t know if you’ve gone shopping for beanbags lately. You can get cheap shiny ones from the chain stores, if you’re lucky you’ll spot a denim one (the Moose recently acquired one as a birthday present, and the sight of him comfortably reclining all over the place has spurred me on), or you can get super deluxe ones that will part you from many hundreds of dollars in cash. My Scottish blood rules out the latter as an option, so my only real choice, dear reader, was obviously to make my own. How hard could it be? Not very hard at all as it turns out.

I wanted to make two really, one as an inner lining, and an outer case that I can slip off and wash. You can get patterns all over the internet, I used the Lincraft one. You just cut out three sail shaped bits and a couple of semicircles for the bottom. I had some superannuated curtains that worked well for the liner, and I had some help cutting it out. The reason this picture is a little blurred is because there was quite a lot of leaping and biting going on… 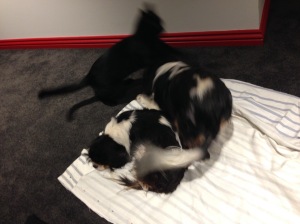 Then you just pin them and sew them together. The bottom has a zipper, and this was my first time doing a proper one. I had to watch three Youtube clips to get the hang of it, mainly because I couldn’t believe that you sew it in over an already sewn up seam, and then pick it undone. 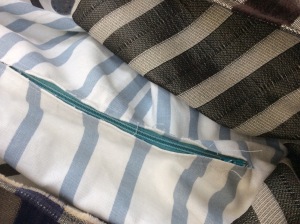 So there. If I can do one, anyone can. I then spent two hours that I won’t get back at Spotlight giving myself a headache choosing the outer fabric. I wanted something tactile, less than $15 a metre (I needed 5 metres) washable, not too patterned, not pink, and durable enough to be sat on by someone who planned to spend hours clutching at her head while simultaneously typing questions marks and exclamations in comment boxes.
I cut out the outer lining a few centimetres bigger all around than the liner. I added a strip 15cm wide to each of the bottom semicircles which would overlap because I wasn’t going to make that opening a zip, just a slip cover. It was even quicker to do because the animals were bothering a very slow moving electrician I’d got in to add some more power points that I hadn’t anticipated needing in the lair. I did fill the liner before squeezing it into the outer cover – three 100 litre bags if you’re planning to use the Lincraft pattern – it’s a big one.

It really only took a couple of hours, maybe three (I’m not counting the hours at Spotlight, I’m trying to forget those), and maybe half an hour to very carefully decant the beans into the liner and then vacuum up the strays.

I’m extremely pleased with it. It’s very comfortable, I can move it close to whatever heater I happen to have turned on. The Muffet now wants me to make her one, but I’m only going to do that after she’s kept her room clean for a month, or after hell freezes over, whichever comes first. Anyway, I’ve got assignments to mark.