The Other Side of the Story

It might just be me, but itnever occurred to me that if this was the centenary of Gallipoli, then there was probably a fair bit of a fuss being made on the Turkish side too, especially as it was their homeland being invaded and they won.

For the Turkish, it’s called Canakkle, after the province that the whole mess took place in, and it’s celebrated on the 18th of March, which was when the naval battle commenced. Did you know there was a naval battle? The idea was that bits of the British navy would sail up the Dardanelles, bomb the daylights out of the forts that guarded them, then the Colonial forces would have the simple and pleasant job of just occupying the smoking remains. This is one of the forts they were supposed to destroy. 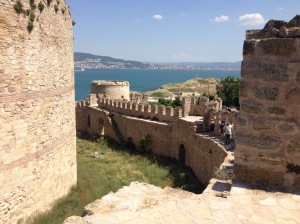 As you can see, not destroyed, due to the Navy not being supplied with any minesweepers, instead being sent some North Sea fishing boats manned by North Sea fishermen with hooks for pulling up any mines they might spot. So that didn’t work. The moral of the story is if you’re going to take the Dardanelles, don’t be a tightarse.

It was during this naval battle that the “Turkish Simpson”, Seyit Ali Çabuk, had his moment. One of the guns guarding the Straits had been damaged and the crane to lift the heavy shells was broken. Good Gunner Seyit is said to have heaved a shell rumoured to weigh over 250 kilos up the stairs, loaded the gun and damaged one of the British ships, which then swung around and struck a mine.  There are statues and cheap souvenirs of the good gunner everywhere, despite there being some doubt as to whether his gun really did strike that ship. Whatever. Simpson, of Simpson and the Donkey fame was only stretcher bearing for about three weeks before he was killed, and why isn’t there any carry on about any of the other, equally brave, stretcher bearers? The answer is because the journalist on the ground, Bean, wanted a good news story to send home and Simpson and his donkey fit the bill. Thus are legends made. 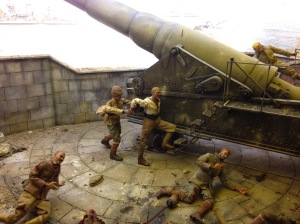 So that battle was won by the Turks, now there was just a bit of nasty business of getting rid of the Entente forces off the peninsula. Apparently what happened was that on April 25th some colonial troops were landed at a couple of beaches and fought quite hard to get away from them.  Some of the defending Turkish started running away, to be met by Mustafa Kemal, now the immortal Ataturk, Father of the Nation, who famously told them that he wasn’t asking them fight, he was asking them to die. Not what I’d call a pep talk, but apparently it worked, and the ANZACs were held to their positions around the beaches for the entire eight months we were here.

How many do you think the ANZACs lost? Around 10,000, which sounds like rather a lot for such a small battlefield, until you realise that the British and French lost 44,000 between them. And the Turks? The Red Crescent has recently done its most accurate estimate yet and thinks that 100,000 Turkish were martyred there. That’s how they refer to it, and fair enough I guess. Another 150,000 were wounded. Why is it an estimate? I’ll show you. 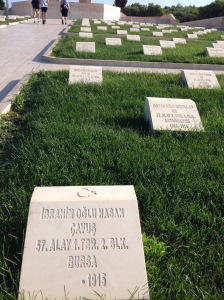 See that headstone? Ibrahim, son of Hasan, no known birth year. They didn’t have last names. No one knew when they were born. Sinan’s great grandfather died at Gallipoli but they have no way of knowing where and when.

Ataturk fixed all that. Did you know that the poor old Turks having won Gallipoli had to spend a further five years after the Great War fighting for their country? Everyone wanted a piece of them, the Greeks, the Russians. Ataturk oversaw winning that war, no wonder they revere him and speak of his words almost as if they were holy. The stuff he got away with after that would make today’s politicians cry. He decreed that everyone must have a surname, pick whatever you like and get it registered. Cut out wearing fezzes, I’m not sure why that one was, he’s a man I need to learn more about. But the huge one, imagine this. He changed the alphabet. Until the 1920s the Turks had written everything in Arabic script. No way, said Ataturk. Roman script from now on. Again, I’d love to find out what the idea behind this massive upheaval was, but I’d imagine to make them more European. Overnight, everyone was illiterate. And the Turkish language has thirty two letters, not twenty six, so they’ve had to add on little curly bits and umlauts to make it work. All of their legal, political, historical and religious documents were in Arabic script and he just snapped his fingers and changed it. But they love him and his images and statues are still everywhere even though he died in 1938, and his words are still quoted.

The really big thing that strikes me is that they let us into their country. We invaded, caused a quarter of a million casualties, and here is one of the major images being used in their centenary occasions. 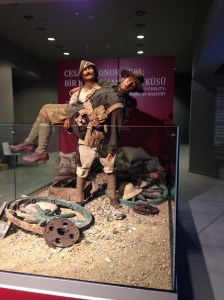 A Turkish soldier carrying an ANZAC. How about that. With the slogan Peace is Possible. What a nation. What a privilege to be over here and be part of it.