It’s all got a bit technical now that we’ve reached the Gallipoli peninsula, so I thought I’d give you a bit of a sketch of my fellow travellers.

We’re split into three groups along military rank lines, we’re in the officers group, then there is senior soldiers, and then Other Ranks. I kind of feel that it’s a bit British class system, but it does increase one’s husband’s chances of having worked with people in his group.

He’s off for a run at the moment along the Aegean with a 21 Construction Regiment mate who is ten years his senior, a triathlete, has climbed Everest and has a part time job guiding Kokoda treks. That should put him in his place.

I’ve mention our Turkish guide, Sinan, who is all kinds of terrific and actually lectures in tour guiding at the university in Canakkle and really only guides now for fabulous groups like us. Our Australian guide is having the time of his life. He’s fun sized retired military chap with a walrus moustache and an encyclopaedic knowledge of the ANZAC engagement which I don’t think he’s got to exercise before to quite the extent that he can with this group. He’s pleased to be able to speak to us in military code, such as Action on Lost, and that if he says wheels on the ground at 7.45, that is exactly when the wheels will be on the ground. A match made in heaven. He’s been guiding battlefield tours for three years and this is the first time his wife has come along to see what he’s been getting up to in Turkey. I have had a bit of a chat to her, but she’s a shy lady with a very low voice, so I’m none the wiser as to what she thinks of the whole thing.

We lunched yesterday with a couple from Another Group, who had stayed a different hotel in Istanbul to us. A truly terrible hotel, according to Pam. Why couldn’t they stay at the Kent where we were? Honestly, their room was a shoebox, and the lift! They waited ten whole minutes for the lift that morning. “What floor were you on?” asked husband. “The first. But I don’t do stairs. We’ve been travelling in Europe for a month and I’m staired out. I’ve been doing 30,000 steps a day”. I took a good look her a silently vowed to eat my hat if that were true. “Who’s your guide?” “Oh, we’ve got Sinan, he’s over…” “I don’t know what our’s is called, Barisin or something, we just call him Barry” “Is he happy about that?” “He seems to be, but he doesn’t like Bazza”. No, quite. “Have you been to Gallipoli before?” “No, we’ve got young children and…” “We were here in 2001, it was MUCH better then. Not so developed, more untouched. But you’ll love the graves. So eethral.” “So…?” “Eethral. Wayne, could you get me some tea?” “They don’t have tea at lunch love, just coffee” “Coffee! I told them I don’t drink caffeinated products! Why couldn’t they get me some tea?”

Anyway, I must go and have breakfast overlooking the Aegean now, before getting on a boat for a not getting shot at look at what the ANZACs saw before they landed, then a scramble around ANZAC cove with an avalanche of lovingly detailed commentary. So here is a bonus photo of Travelling David Tennant getting attacked by a giant Aegean sea snake. 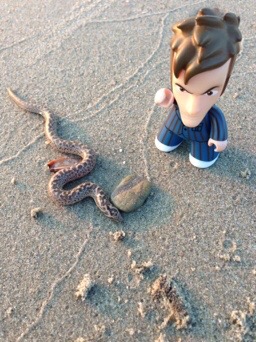