You know, I thought it would feel a lot more Asian here. Who knows why, what do I know about Istanbul, except that it used to be the throbbing heart of the Holy Roman Empire, and some stuff about the Ottomans. It actually feels very European, except that everyone in the world is here. There are less covered heads than in Burwood. The traffic makes you pleased not to be driving, but all of the beeping is very polite, the beep seems to be interchangeable with the indicator, with lots of letting people in with a centimetre to spare. Cars don’t have the ubiquitous scrapes down the sides like cars in, say, Florence do, so it obviously works.

We’re staying in the old city, so our merry band of elderly military engineers and their wives with don’t care hair went on foot today to visit the Tokapi Palace, which is very spread out, apparently because the Ottomans who built it were nomadic and didn’t like to feel cooped up, and entirely populated by tourists and their guides. I should mention our guide, Sinan, because he is an absolute legend and ask for him by name if you happen to be visiting Turkey. He’s not just an experienced tour guide, his degree and Masters were in tour guiding and he is currently writing his PhD thesis on burn out in tour guides for some reason. I’m sure we won’t be contributing to that, he’s told us that we are the very first tour group he’s had with no food requests. There are nearly ninety of us, and no gluten intolerance, no allergies, no vegetarians, no paleo. That’s the military for you. I did notice that Sinan wears one of those rings with a little secret compartment that you can fit a knockout drop into, I should take bets on whom it’s for.

I won’t go into the intricacies of the Sultan’s court, I just want to give a special mention to some of the exhibits. I can’t show you photos, because “no picture”. One room was the treasury, and had some of the biggest diamonds in the world in it. One was 86 carat and, in a setting surrounded by smaller diamonds, it was the size of a small pear. There were crowns and brooches with ridiculously massive emeralds and rubies, and other slightly smaller diamonds, but still the size of a sugar cube, and all just in glass cases with one very bored looking guard, the “no picture” guy. I would assume that the glass cases are bullet proof, but it wouldn’t be Mission Impossible to break them out. Though if you were caught, there’s a tasteful little fountain in one of the gardens where they used to do all the executions that I’m sure they could put back into commission.

And I’m sorry, WordPress is being a dick about inserting photos, so you’ll have to work out which goes where. 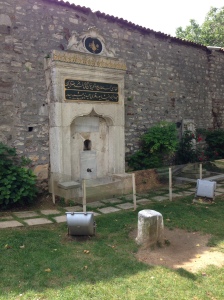 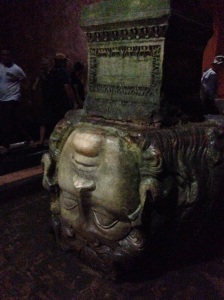 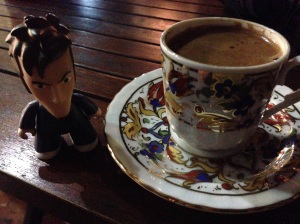 The other place worthy of special mention was the holy relics rooms. Again, yes bulletproof looking glass, and one “no picture” chap. With not a lot of fanfare, and a fairly small queue you had a display featuring: some very fancy containers for the Prophet Mohammed’s beard clippings and one of his teeth, plus some dirt he had walked on, and a whole lot of associated kit. But not only that. A pot belonging to Abraham. Yes, that Abraham. The turban of Joseph. As in And the Technicoloured Dream Coat. A sword belonging to David. As in And Goliath. Aaaand, the staff of Moses. You know, the one that parted the Red Sea. It looked rather flimsy, actually, a bit reminiscent of bamboo. They also had an arm and a bit of skull of John the Baptist, but that guy seems to have enough bits scattered over Christendom to build an entire Baptist Church congregation. So, is it fair dinkum? I don’t even want to Google it. These guys were the Ottomans, they did ransack Egypt, which is where that stuff would have been. I dunno. The actual staff of actual Moses? Did I really see it?

We also popped into the underground Cisterns built by Justinian, and not used by the Ottomans because apparently they prefer running water, not stuff that sits around for any length of time, it’s a Muslim thing. We were a party of engineers, after all, and it was very impressive. A couple of the columns holding up the roof had leftover Roman heads of Medusa at the base to prop them up to the correct height. You think they could have at least put her the right way up. Though I guess they weren’t expecting tourists from fifteen hundred years later to be gawking at them, they were supposed to be under water.

And Travelling David Tennant got to have another much needed Turkish coffee.

Then the highly anticipated Grand Bazaar. Which was a lot less chaotic than I expected, plenty of sweets, scarves, leather, chessboards, crazy hats that I’ll have to revisit for the Horror, and carpets, obviously. I did want to buy some of those thin cotton Turkish towels that we used at the convent in Florence if you’ve been following my travels, but Sinan took us to a shop outside the Bazaar for that. Four for forty five bucks, which was very pleasing. The shops at the Bazaar seemed quite expensive, and a bit of a wander around the streets near our hotel showed us little markets just about everywhere. But there were some rather terrific looking winter coats I’ll have to pop back for if I don’t see them anywhere else. If only you didn’t have to establish a whole relationship with a shopkeeper to buy something. You know how I feel about that.