The Most Comfortable Chair in the World

Floriade wasn't quite what I expected it to be. Yes, there were tulips. Also pansies and decorative herbs and that's where I run out of floral vocabulary, so various other flowers, possibly including lilies. 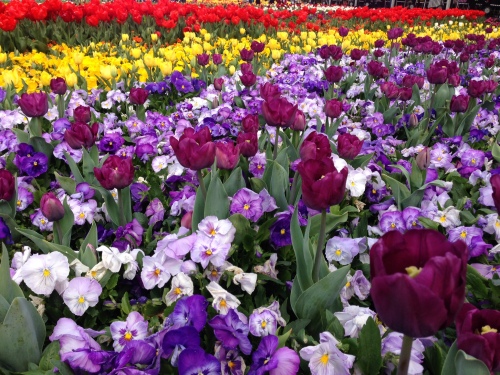 There was a smidgeon of art, like the abandoned car complete with creepy scarecrow passengers covered in foliage. Garden gnomes which the public could paint for a moderate fee. Some of the flower beds were arranged to make amusing shapes and pictures. But you had to take the word of the signage, you could only see this artistry from above. And the only way to get above was to get on the Ferris Wheel, for which there was a hefty line and those things freak me out anyway, just doesn't seem natural. So what did I expect? I dunno, perhaps a little less in the way of bare paddock. Maybe some signage telling us what the flowers actually were so I could make my blog post more informative.

But there were also little sprinklings of market stalls and we happened upon the stall for the World's Most Comfortable Chair right at about the time when we all felt that a nice sit was just what we could do with. Of course I didn't sit in them, I perched on an iron bench far enough away from the rest of my loved ones that I could pretend I had nothing to do with them. But they sat there long enough that they got sucked in by the spiel of mesmeric James, and the comfort of the chair, and we ended up buying one.

Days turned into nights, the weeks and months passed, the renovation FINALLY got underway, we got a kitten, and still no Most Comfortable Chair. Had we been had? I was finally persuaded by my most persistent child, the Horror from Outer Space, to hunt for the receipt AND I found it. I gave them a call. “Floriade?” they said. “Was it James?” they said. “Huh. I'll call you back” they said. The long and the short of it was the James had forgotten us. It arrived two days later. Flat packed.

Look, I'm usually pretty good with a flat pack, I know now to allow extra time for assembling things inside out and not to curse too much while disassembling it, at least the first time. But this thing was all ropes and the worst set of instructions I've seen that wasn't obviously a bot translation from the Chinese. “Attach with included hardware”, I mean really. You might as well just say “you're on your own, sucker”. Even the photo of the assembled Comfortable Chair was slightly out of focus, and about five centimetres square.

The main problem was that the holes in the frame for the ropes to go through were slightly too snug for the ropes to go through. Muffet was at her most helpful. “Burn the ends of the rope to melt them”. Which is not bad advice really, except that the ropes are about two centimetres thick and I'm a bit short of flamethrowers. As a side note, safety matches have got far too safe. I want the option of matches that light up with such a flare that you drop the first one in fright and set fire to your socks. Non-safety matches, if you will. I ended up using some duct tape that I found in the bushes, dropped by the roof vacuuming man who had lost the will to go on after encountering a century's worth of rat carcasses in the chimney. 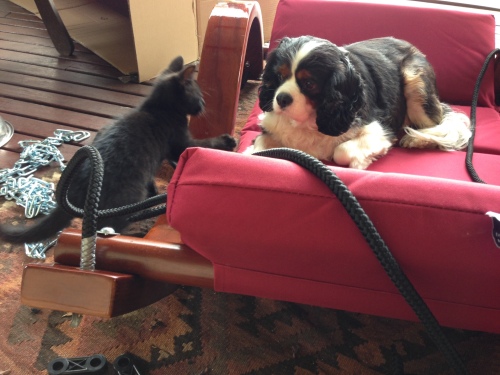 See what a lot of help I get?

I did get it up in the end. It's suspended from a chain I threw over the roof beam, which seemed like a fairly secure way to hang it. But then I've watched the Horror sit in it, and he's a young man who can't just sit. He swings it and wriggles and rocks it backwards and forwards and I'm a bit concerned that the chain is going to chainsaw its way through the beam.

But I have to admit. It is very comfortable.

2 Comments to “The Most Comfortable Chair in the World”