Should I go to Costco?

Well, of course I should, and I did, but the real question is, should I go again? And in the interests of not being click baity, the answer is also yes, and this post is about telling you why. And possibly saving you a trip.

I’ve been meaning to go since it opened in Auburn in that strange pulsating section of Parramatta Road just west of the markets where a rash of furniture super centres simultaneously sprang up about twenty years ago. I was taking the Horror to Bunkers (a bed emporium that I highly recommend) to pick up his new bed. He’d finally had enough of sleeping on a mattress on the floor, it was too easy for his mother to wake him up by jumping up and down on him. He was very specific about what he wanted, an elevated double bed that he could make a cave under, and also paint Cadbury purple, his favourite colour. We were ultimately successful in this particular quest.

It’s a bit hard to tell, but the carpet and trims are the same shade of purple, as is the fleece blanket on the bed. The whole setup makes my teeth hurt, but he likes it. Anyway, five minutes before Bunkers looms that giant warehouse. I explained to the Horror what it was. He said we had to go.

I was expecting an obese Aldi, a shop I’ve entered about five times now, only to emerge fifteen minutes later bemused and empty handed. I don’t get Aldi at all. I really only buy cat food, butter and toilet paper from supermarkets these days, so Aldi doesn’t have a lot to offer me. Anyway, I was very very wrong.

Costco has a lot of things, not just super sized supermarket fare, to which I’ll get in a moment. Mattresses, diamond rings, giant televisions, business luggage, faux antique furniture, about an acre of horrible plastic clothes, safes, pressure washers, compost bins, business luggage, drones, clothes steamers, a toilet seat with LED lights, presumably to improve your aim in the dark. Some good brands too, like Vitamix and KitchenAid. It has things that you never knew you needed.

I’m pretty sure I need this trolley. I’m not sure why, but I can see it in my future. They also have things that I definitely do not need, also in great quantities.

I can see the appeal of the human skeleton, but where does one start with the spider? No one needs a spider of that size, and I feel a rant about the internal structure of invertebrates coming on, so I’ll just leave that thought with you and move on.

I’m really here for the consumables. Toilet paper, to be specific. I’m not sure what my children do with it, make hats or corsages or something, but we go through it by the pallet load. And they have it here by the pallet load, you can buy a pack of 48, big rolls too, not those “we hope you haven’t noticed us reducing the size but not the price” rolls that Kleenex have been putting out lately. I could possibly get them for a similar price if I waited for the specials to come around at the local, but one has to concentrate. I also need much cat food. I’m currently in possession of two felines. Stormaggedon has been with us for nearly two years now, but we’ve also recently acquired Miffy from my sister whose strata committee rather turn up their noses at companion animals. Unfortunately the two do NOT get on, and spending the day trying to kill each other seems to give them a rare appetite. It’s marvellous to be able to buy a box of 36 sachets which at current rate of consumption lasts me about a week. Also a jumbo box of that nice cat litter that doesn’t stink out your upstairs bathroom, Miffy has decided that she’s never leaving the house again after encountering the local gangster cat.

I picked up a litre of beautiful dark maple syrup, a couple of kilo packs of Callebaut chocolate chips for the Moose’s favourite choc chip biscuits (I’m pretty sure I’ve given you the recipe at some point), the purple fleece blanket pictured above (I ended up going back and getting a green one for myself, it was very thick and fluffy and $20), a giant box of muesli bars (the kids say my home made ones are too crumbly, the fussy buggers), a tray of San Pellegrino Arianciata Rosso for a treat, five kilos of flour, a lifetime’s supply of toothbrushes, toothpaste and Metamucil. The giant pack of chicken salt was probably ill advised, and I’m still not sure whether a kilo of Jelly Bellies for twenty five bucks was great or terrible. Depends how many chocolate ones I get in a row, chocolate jelly beans should not be a thing. Speaking of things that should not be a thing, 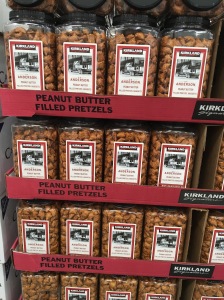 They did have quite a few items that would encourage you to make bad choices, like the huge packs of chicken salt already mentioned, but also American sized packets of chips, 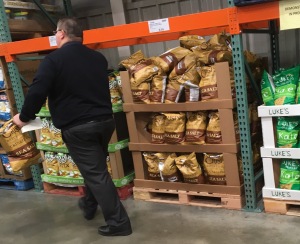 Yes, I’m judging. Though I really didn’t know what to make of some people’s choices,

Boxes and boxes of pink salt. Nothing else. Pink salt.

The fresh food was pretty good, they have CluckAR approved free range eggs, I got a kilo of lamb cutlets for $35 and we had them for dinner that night. They were great, not too much fat either. A kilo of haloumi is never going astray at our house. The fruit was a bit patchy, but the kilo packs of salad leaves look good. I probably wouldn’t regularly buy fresh food here unless I’m having a barbecue, everything is in catering sized packs. Even though I have three hungry teenagers, they’re very rarely all present for a meal at the same time. Also, my freezer isn’t very large and already has a lot of home made stock cluttering it up.

The prices range from could have got it for that on special at the local to are you sure that’s not a misprint. For me it was worth the sixty bucks annual fee. I do need to lie down for a bit once I get home, the lights are very bright and I’m sure I haven’t noticed half the stock that they have due to the sensory overload. But I’ve essentially stopped shopping at the local supermarkets, I’m only shopping for fresh food now (not at supermarkets, obviously, I’m not a sociopath. Hmm. Was that a bit strong?). I can see myself going back probably every three weeks or so, so if you want to check it out before joining, let me know and I can give you a very patchy and incomplete tour and talk you into buying something inappropriate.

3 Comments to “Should I go to Costco?”