You Had to Be There – Venice

There are some places, the Grand Canyon, the Opera House, Disneyland, most of the really big churches in Europe, that you just have to be there. Venice is one of those places. You can see as many photos, read as much as you like. Nothing prepares you for the reality of this crumbling, swaying maze of four storey buildings perched over the swamp. How could you live here?

I think a lot more people visit than actually live here. I’ve heard Chinese, Japanese, French, German, Russian, so much Russian, so many furry hats. Some yobbo Australians, how embarrassment. And this is the off season. I can’t imagine how insane it is in the summer. Firstly, it’s not all water, there are some streets, some opening into squares, some disappearing into nothing. This is not just a tourist photo, the whole island looks like this. 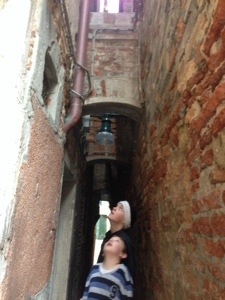 The shops are amazing. Yes the four kilometre shopping strip in Milan did terrible things to the Muffet’s funds, but it was, you know, shops. This place hasn’t room for shops like that. You can’t change any of the shops in Venice from how they were five hundred years ago or so, so they’re all tiny and tend to the artisanal. The boys are in heaven.

I bought a belt, and got the story of how the stamp for the leather was made (copied from the decoration for an old Venetian book) the care put into the dyes, the shape of the cow, how they’re cut, each belt has the holes punched into it after you buy it to suit you. Now this is the kind of shopping I love. 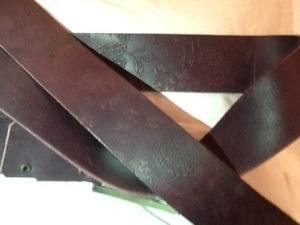 We went on the behind the scenes tour of the Palace of the Doges, and it was just incredible.

We got the tour of the jail cells, in use for five hundred years until the 1920s!, the rooms of the secret service, the history of the very sophisticated government bureaucracy that dates back to the 1300s. Also the history of the celebrated Casanova’s imprisonment and escape from these very cells. The structure of the place was amazing, it was burnt in the 1500s, then very quickly rebuilt by an army of shipwrights so there’s a very nautical feel to the place. The halls of government are huge, without obvious supports or columns, we got into the roof above them and it’s like an upside down ships keel. The floors in the upper rooms bounce unnervingly, the structure is wood, and stone floors just shouldn’t move like that. The doors open upward like in ships to accommodate the moving floors.

We weren’t able to take photos, but Google it. I felt sorry for the artists commissioned to decorate the place (I had actually heard of Tintoretto, don’t think much of his clouds) they were obviously given a room or ceiling, a general theme, then told to cover every square inch with allegory, wood carvings, ancient heroes, religious themes and acres of gilt. It must have taken ages. Lavish doesn’t even begin to describe it. At least they got to do their paintings on canvas, then have them affixed to the ceilings, rather than having to lie on scaffolding for years like poor old Michelangelo. When I get home, I’m covering my walls with material and having a wood carver work for us full time. I want ornate.

Speaking of which, our hotel, the Hotel Lux, has material covered walls, tiny rooms, ornate fittings, very firm beds and god knows how difficult it must have been here when all the tourists started demanding bathrooms. We reckon we’ve identified the bathroom block in our hotel, our theory is that there was a gap between the buildings that has been filled up by a vertical column of bathrooms. See? In the middle. With the water pipe going down.

I’m fascinated by the logistics of this place. In the morning everyone puts their rubbish neatly in the streets, and a man with a trolley picks it up. There are no vehicles here at all, not even Segways.

The cost of living here must be huge, there’s plaster falling off the walls all over the place, bulging walls, and one shopkeeper told me you’re not allowed to touch anything, the whole structure must be preserved. It must be terribly frustrating, but it makes the place gorgeous and unique. It also means that I’m never going to be able to find that sock shop I saw on the first day. We went on a little wander, and rushed passed a tiny window with what looked like feet lingerie, the most exquisite lace socks and things to wear with your ballet flats. I’m sure it was less than five minutes walk from the hotel, but alas, it too shall pass into memory, because I’ll never remember if it was a right and a right and a bridge then a sharp left and an archway and the second left in the little square. Never.