We’re driving to the snow on the weekend. Yes, yes, yes about the falling over, I’ll try not to. Like I mean to. Anyway, it’s a bit of a drive and I have quite the knack for falling asleep while driving. It does mean that I have no problem getting to sleep at night, but a bit problematic on a long drive. So I suck on sweets for my bit, and avoid driving at afternoon tea time and after nine. My sweet of choice is Koolmints, but I thought I’d make my own this time.

Had a look at making humbugs, but that seems to involve third degree burns, so I had a go at butterscotch. Here’s the Women’s Weekly recipe.

This cookbook was published just as Australia was going metric, so the back of the book has handy conversion tables to metric. A pound of sugar is 453.6 grams. Quarter of a pint of water is 142 millilitres. Who knows how much a dessert spoon is, I just used my breakfast spoon, and anyway the glucose is so viscous you’re never going to accurately measure it except by weight. And why are they mixing weight and volumes? Instead of half a cup of brown sugar, I used half brown sugar and half dark muscovado sugar. Partially because I like the rich treacly taste, partly because I’ve run out of brown sugar.

So you put all the ingredients in a saucepan, and bring it to the boil while stirring with your trusty wooden spoon. After the butter has melted and the sugar is dissolved, you turn up the heat and leave it alone. Well, you put the sweets thermometer in. That little eight dollar miracle takes all the fear and loathing out of sweet making. It’ll start bubbling up, adjust the heat so it doesn’t bubble right on out and all over your stovetop. But once you’ve got it bubbling about half way up the saucepan and the sweet thermometer measuring away, you can leave it alone.

It took about half an hour to get up to that temperature, even with obsessively watching the temperature. You want it at 290F, I’m going Fahrenheit because that side of the thermometer is easier to read. As soon as it touches that temperature (hard crack if you’re doing it the old fashioned way), take it off the heat. With great foresight, you’ve put out a biscuit tray covered in baking paper. Slosh that boiling toffee all over it.

It takes a surprisingly small amount of time to cool down, only as long as yet another irate phone call to a bathroom supply shop. Try to cut it up before it solidifies, and use your largest knife, you need leverage. 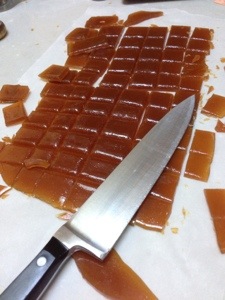 If you don’t want it to all stick together you’ll need to wrap it which does sound like a pain in the neck. I just cut strips of baking paper and rolled them up, then packed them in small ziplock bags.

Here’s the important step, hide them from the children. The leftovers went in seconds.