Those of you that didn’t like the Hobbit movie or found it boring can go suck a lemon.
Admittedly, it isn’t for everyone. It is exactly tailored to people like me. I spent a lot of time in Middle Earth in my youth, way before there were any decent movies made about it. I taught myself the Angerthas alphabet, featured in Thorin’s map. I learned quite a bit of Sindarin. I read not only the Silmarillion, but the far more disjointed Unfinished Tales. I took for myself a Sindarin name, and here it is, rendered in Tengwar.

I am a hard core fan, and was delighted with the job Peter Jackson did with The Lord of the Rings. The Hobbit didn’t bother with trying to be a stand alone movie. It assumed that you had a working knowledge of Middle Earth and were aware that it was the first in a trilogy. All those people that thought it went on forever and nothing really happened, they should have gone to see Skyfall. This movie was not for them.

Well, I’m glad we’ve got that established. I’m looking forward to seeing it in 2D when we get the DVD, because I found the 3D experience to be a little unnerving. I appreciate it was new technology, and was certainly nothing like anything that has gone before it, but it made me feel like I was in a Disneyland ride. I’m not sure what it was, something about the lighting, or some weird perspective thing made me feel like I was being tricked and it was off putting. I also hate wearing the glasses, especially as they have to rest uneasily over my own glasses.

I really liked how fondly they treated us fans, with the cameos by LOTR characters and the music. I thought the bit with Galadriel and Saruman was very important and well done, despite not being in the book, and how old is Christopher Lee now? Hang on, I’ll look it up. He’s NINETY!!! A month younger than my grandma, and she hasn’t starred in any blockbusters lately.

I felt like the massive amount of nose and hair and eyebrows the dwarves had going on hampered their performance a bit. I agree that Richard Armitage spent a lot of time scowling and brooding, a very similar performance to that he gave in Robin Hood, but that’s really what Thorin does if you’ll go back to the text. I’m glad Gandalf got to get a bit of fighting in, rather than just standing about looking wise and saying memorable stuff.

I thought there were some overly cheesy moments. I really didn’t think Bilbo rushing in to save Thorin from Azog’s minion worked at all, Bilbo really shouldn’t be starting to earn his place until the second film. Much of the action inside the goblin’s lair was frankly unbelievable. But I LOVED Gollum, and I thought Radagast was a good inclusion too, and a past Dr Who!

I’m really pleased Peter Jackson has been allowed to lavish such attention on this story. We had a lovely time in the car going home discussing what dialogue was and wasn’t in the book and where they’ll be able to stop the next movie and how much a mountain troll looked like a cave troll. We’ll have to go again these holidays and next time I’ll remember to wear my dragon earpiece along with my Evenstar, Mordorable T-shirt and One Ring that I wore to today’s viewing. 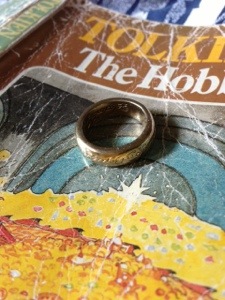 2 Comments to “The Hobbit Review”