I’ve spent most of the morning calculating and paying super for musicians, and that makes me cry with boredom, so I can imagine how you’d feel about it. Instead of going into that I’ll give you two things that I’ve made this week that I’m rather pleased with.

The first was inspired by a key holder I saw on the ThinkGeek website. I really cannot believe I’ve never thought of making household objects out of Lego before. We have about ten kilos of the stuff, although in these decadent days it’s a lot more specific than the primary coloured bricks of my youth. I decided to raid the Horror’s stash because his was less organized than the Moose’s, but I knew I’d get in trouble. To circumvent this I thought I’d tidy it up a little. I tipped out a large boxful, procured three smaller boxes and sorted it into specific (weapons, leaves, mini figs), difficult shapes and general shapes. There was a fair amount of washing and drying going on too, a neglected bag of lollies had met its doom in there quite some time ago.

What I wanted to make was a rack of utensil hooks. I have a large glass splash back surrounding my stovetop and a goodly number of utensils with holes in the handles. I have some suction cup hooks which work well, but are outrageously expensive. I bought some of those stick on hooks which are also fairly expensive for what they are, which is completely useless. Apparently their formulation is such that if you ever want to remove them in the distant future they will come off leaving no sticky residue. Sadly, they just don’t stick on in the first place. Too politically correct. At least you can get robust double sided tape, which was all I needed to mount my Lego creation. 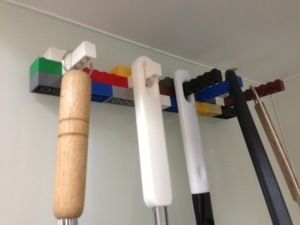 As expected, I did get in trouble. “Mummy, I might have had plans for that.” . “Well, it was all a sticky mess, and I’ve sorted it for you”. “Hmm. Thank you for sorting it for me, but next time you want something built out of Lego, you ask me.”. I might have to get my own Lego.

Then there’s decorating the ankle brace. I had some left over glitter felt from the Costume Making Experience and what better use could it be put to than sprucing up the ole boot. 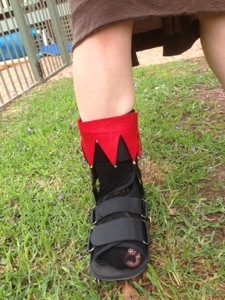 I even sewed some tiny bells on in the devout hope that I would be shot of the damned thing by Christmas and could reuse it as neckwear for the doggies. I also have in mind a white fur cuff, but you’ll have to wait for next week for that.