I done a necklace! I haven't done one for AGES, what with working and studying and kids managing to fit an an outrageous amount of extra curricular and making kilos of chocolate chip biscuits and moving upstairs. I'm going to a fancy military dinner next week, or possibly the week after, I really should pay more attention, and of course the outfit I plan to wear requires a rounded necklace, rather than the pendant type I tend to make. 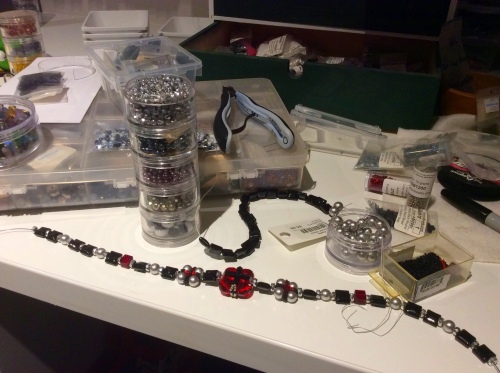 And there it is. You'll notice that it's on my flashy new beading desk that I'm managed to clutter up extremely quickly. Yes, the renovation is finished, and you didn't hear about it because it was rather uneventful, which is excellent for living through but no good for blogging. Except for the shower screen, which I should have told you about, and the smoke detector which is too annoying for words and I'm worried that if I start writing about it I may actually set it off. And the painter's name is Silver. Either that or he's lost the battle with autocorrect.

I got terribly terribly efficient and went through all of my beading magazines and scanned all of the patterns I wanted to keep into Evernote, and I highly recommend it. You see, in my new work area, or the Lair as I like to think of it, I have ample shelf space and no desire to put anything on it. So the magazines all went out, and now I have this terrific system of filed patterns, searchable with tags and everything. When one wishes to produce a necklace based on a string of black agate squares, one merely searches the tag Square, and there's a pattern from Beadwork 2010 that fits the bill perfectly. The pattern was for the red square in the middle, but it scales down beautifully to 8mm rounds with size 15s and 1.5mm cubes to make the silver squares either side of the centre.

Do you want to see the Lair?

We put in an upstairs bedroom, and there was this space around the corner from the stairs and I baggsed it. Some amount of joinery later, and the kids are lucky to ever see me downstairs. To the point where the Moose has been known to email me goodnight. The curtain conceals, not a window, but an enormous amount of triangular storage space, all around the corner of the roof. It does require some stooping, but it tucks away ones various hoards of material, wool, coffee tables, craft stuff, suitcases, framing equipment, screwdriver collection and so on. IKEA has made a fortune out of me. Awesome doesn't even begin to describe it.

I don't know if I've got time to do earrings. Oh, I do have some that would match it, but they're not long and dangly and fancy. Hmm. Depends what my hair is doing that day, it's very temperamental and one never knows until one gets there.

Did I mention that the dinner is at Gallipoli? Yers. Expect to hear a bit more from me in the near future.