“Well, we won't know until we've got in there and had a dig around whether you just need a bit of scraping out or if we'll have to put a bolt in it”. Not my car, dear reader. My ankle.

I may have mentioned my skiing injury once or twice in these pages, the splint, the boot, the cast. Two years later it was still randomly swelling up and causing me to not run around The Bay. So I went to an ankle man who spent about thirty seconds poking at my ankle and tut tutting at my scans, and the above was what he came up with. And yesterday was the day.

The big problem was that if he did put a bolt in it I would be back in a cast for eight weeks and Not Driving. The Moose had suggested leaving the procedure until he was old enough to drive, a mere two years away now, so help me. I like to get these things over and done with, so I booked in and crossed my fingers. I also washed everything in the house that wasn't nailed down, bought a bushel of apples and many litres of milk, some kilos of meat, practised hopping and did some tricep exercises, just in case.

Before the day dawned I got everyone out of bed and had my allotted piece of dry toast and black coffee before the cutoff time of 7am. Dear husband took the day off work, so he drove the boys to school and I took the Muffet. When I drive her in her reward for getting ready early is for me to take her to breakfast at a coffee shop close to her school. “But I won't be able to eat!” I protested. “So?” was the daughterly reply. It seemed to increase her enjoyment of the meal.

Such a delightful child.

I spent the morning taking my mind off things by going up to the shops to get a birthday present for the Moose's friend, supplies for the Horror's DaVinci Decathlon, another gross of black hair elastics for the Muffet who likes to feed them to the dogs and even more bread and milk. Who knew when I would be able to come here again?

At the hospital they slung me into a bed fairly quickly and kicked the husband out so that he could go home and pretend to be simultaneously working and caring for his wife. When in fact, he was just working. The wait began.

The man in the bed next to me yawns. I feel a little sleepy. I could actually have a little nap. I'm already in bed. Hopefully they would realise that doesn't mean I've been anaesthetised.

Got a bit of crocheting done. Caught up with The Slatest. Took a before shot of Schrödinger's ankle.

Took a very wrinkly selfie. At least they're smile lines. Played around with some filters before deleting it and taking a less wrinkled one (ie less smiling). Started reading the Hitchhiker's Guide for the googleplexth time.

I can hear the man next bed getting his leg shaved.

Hungry. My stomach is starting to rumble. What I'd really like is a glass of champagne and a bowl of salted almonds.

The older woman in the bed on the other side is alternating moaning with coughing up a lung. The nurses ask if she's alright, could they get her anything, she says she's fine. I hope they anaesthetise her soon.

My feet are cold.

The ward closes, so they wheel me into the post-op ward. Those beds don't have a great turning circle, and I feel bad about sitting in the bed crocheting instead of getting out and helping push, there's not actually anything wrong with me yet.

Even after I've met the doctors, had my ankle drawn on and been cannulaed I'm left in the waiting room for exactly twenty seven minutes. I pass the time by seeing if it's true that you can lower your heartrate with biometric feedback. I think it is, I was able to get it from 70 down to 60 most times. The anaesthetist had told me that he usually gives patients a little something when they're in the waiting room to calm them down, but I seemed too chilled for that, and did I like the music they were playing? Debbie Harry was fine by me, and also, wasn't I going to be unconcious?

Eventually I was, and then suddenly I wasn't. I was shuddering though, my usual response to whatever they give you when you're being operated on. I think what woke me was a nurse piling heated blankets on me and asking if I still needed the sick bag? My ankle! I dived under the blankets and there was no cast! No cast! Whoopee!

The nurse said I'd woken up nauseous and the doctor had come to see me to tell me they didn't put a bolt in. What was the point of talking to someone who clearly wouldn't remember anything of it? He'd written it down, though, five days on crutches, don't get the bandages wet and come into his rooms next Friday to get the stitches out and take these drugs. No cast! Man, that would have sucked. I can do five days on crutches easy.

So this morning I've managed to attach a plastic bag to my foot so I could shower, showered on one leg (the old skills remained from last time), and had breakfast. The anaesthetist has given me Panadeine Forte and said I can take Nurofen as well, but I'll get very constipated. I'm already on industrial strength Metamucil, so I may have to swallow a plunger. Now that I'm back in bed, I'm getting a message from the good old non-plastered ankle. 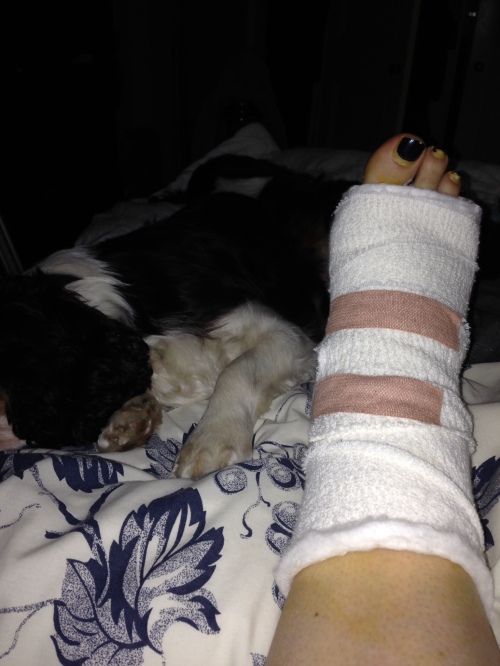 What's that you say? Take the drugs! Oh yes, the drugs. Don't mind if I do. Then I might get to work on that hat I'm crocheting. And have a little nap. It's turning out to be a pretty good day.