Earlier in the week I had a day full of absolutely no children. So I thought I’d go on a little adventure. I wanted get some cheap fruit for the jammin’ stall I’ll be running at the school fete in a couple of weeks, but thought Flemington Markets sounded way too daunting. So I decided to go to Paddy’s Markets because I haven’t been there in years, AND you can get the freshly opened light rail right to the door. 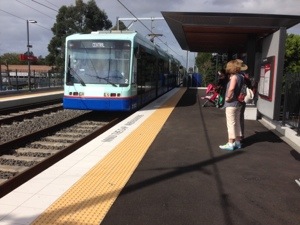 The light rail is an odd transport link in that it really doesn’t go anywhere terribly useful. This is because they’ve used an old goods line that was routed to get stuff from various ports on the harbour to various factories further inland. Our suburb has a stop because the line happens to run along the local canal. Anyway, on this bright morning I hauled my old lady shopping trolley up the stairs to step straight on to a service full of prams and small children, all of whom were eating bananas. I have nothing against bananas as a form of nutrition, or as a base for a tasty cake, but when eaten in public they smell like death and should be banned.

I’m not entirely sure where all those kids were going, possibly to what’s left of Darling Harbour, but they’d all trickled off by the time I got to the markets. I fought my way through the fug of cheap plastic to the back where the fruit is and did find myself some cheap apples (apple sauce, and for my children to eat) and tomatoes (roasted tomato paste, see a previous post). Of course if you add on the transport fare they’re not so cheap, but I’m planning to put that in my entertainment budget instead. 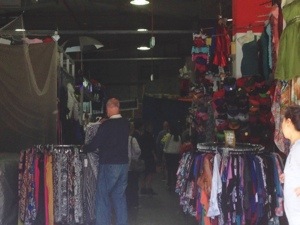 I found the rest of the market to be deeply depressing. Cheap garbage being bought by bogans dragging unwilling children through the dimly lit aisles. Tshirts with horribly misogynist slogans, acres of identical i-cases that would fall apart if you looked at them too hard, knock off handbags, plastic plastic plastic.

But then I saw a stall selling Vietnamese clothes, possibly made by three year olds sheltering under a water buffalo, that were just lovely. The stall keeper recognised a sucker and dragged me in, handed me an armful of tops, allowed me to try on one, then started stripping it off and buttoning me into the next one. Admittedly those knot buttons are a little tricky, but dear reader, can you imagine it. Perhaps from the shock of being manhandled by a woman twice my age and half my size, I bought three. They were really cheap! And perfect work tops for this tricky trans-seasonal moment we’re having. I’ve been looking for work tops for ages, why are so many of them see through? I love my Victoria’s Secret collection, but I don’t want people to see it. And I don’t want to have to wear a shirt underneath my shirt, that’s madness.

I wore the purple one yesterday to work and it was just right. Comfortable, breathable, I hate to think what will happen when I wash it. I might soak it in a vinegar solution first. I’m certainly not handwashing it, I’m not that kind of housewife.