It’s a common solution to a common problem around Europe. Here we have this castle or palace lying around empty now that we have some semblance of democracy, and here’s all this detritus lying about the place because people have been living here for thousands of years, not to mention those over eager nineteenth century archaeologists bringing truckloads of the Middle East home to put back together. Let’s put the latter in the former.

And so it is in the Castello Sforzesca. 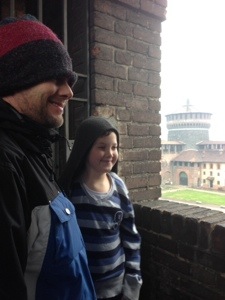 I think we were a bit spoilt in Germany. You can guess how their museums are laid out. Subject order, chronological order, huge amounts of information. They’re a little more laid back here, which for some aspects of life are terrific – the kids aren’t getting the death stares they were in German museums – but not so great for getting a picture of the grand sweep of history that the castle represents. In fact they hardly mention the castle at all. There are just bits of castle with, say, a collection of armour and assorted weapons in it. Or a dungeon with a couple of mummies and sarcophagi far from home lumped in with local Bronze Age finds, in which a glass case full of what looks a lot like neck rings and bracelets is just labelled “Metal Hoard”. Frustrating. The castle is in very good shape, but I’d love to know a great deal more about it, instead of passing random doors and not knowing what they were used for. 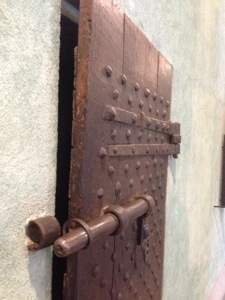 Or these heads, mounted just beside the top of the portcullis.

I think there was a sign below mentioning that they were Roman, but from where?

I know who this guy is. 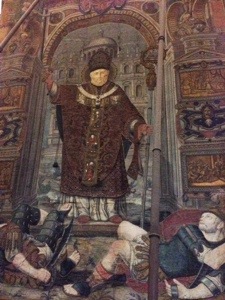 Sant Ambrogio, he looms large in the history of Milan, having been a very busy bee around the end of the 300s AD. And what gets me, and freaks out the Muffet! is that you can go and visit him in his church just down the road. 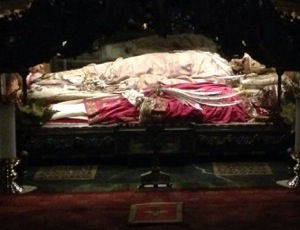 I think that’s him in the red. Again, more information! Actually, the church did have a little sign in English with the history of the body, because of course all I wanted to know was “no way! Is that really him! His own dead body!!”. Yes it is, placed in its current casket in the 19th century. His body has been continuously venerated all these over sixteen hundred years. I can’t believe there wasn’t a line out the door for it, instead of a solitary weeping Orthodox woman begging for his intercession.

I’m also getting the impression that Leonardo da Vinci spent a fair bit of time in these parts. After passing through rooms in the castle with painted ceilings we came across one full of scaffolding with a sign saying it was under conservation to restore the work of Leonardo on the ceiling. He’d done a rather nifty leafy thing, giving the impression of a rainforest canopy. We’re going to see the Last Supper tomorrow. Just briefly though, Giorgio says museums give him the bores. I think we’ve just about had enough of them too. 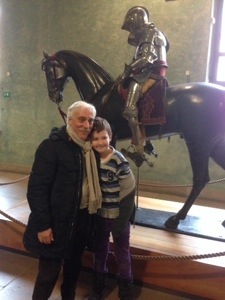