There’s a lot of things to like about Germany. It makes such a difference to your enjoyment of a city, Barry O’Farrell, to be able to get around it easily. In Germany the pavements are wide, there are dedicated cycle ways every where, the public transport is integrated and frequent and clean. Some of the bigger cities, and this is also true of Austria, seem to have been built for giants. The buildings and roads are just enormous, you could ride an elephant into your hostel. If you happened to have one. You can take your dogs anywhere, into the banks, into the shopping centres, into most hotels. I’ve never seen one poo, so I don’t know the protocol, but maybe they’re better trained than at home.

Embarrassingly, almost everyone can speak a little English. I feel I like a cultural imperialist. I have picked up a few words of German, and even downloaded a language tutor app, but got annoyed when I found out that the gender for the word “girl” is masculine. Like an English speaker should complain. I may continue with it, I’ve been told my pronunciation is very good (thank you Christopher Bowen), and I want to come back here. I’m pinching a couple of words. They call their phones a Handy, I like that. It does mean expunging the adjective from my vocabulary, but I can live with that. I’m also taking Schicksal for the word fate. Schicksal.

The place is full of history, but I guess that’s true of all of Europe. Even the little village of Wittmar, where we were so generously hosted, had a ruined Dark Ages castle and the Bismarck tower, a popular local suicide spot. 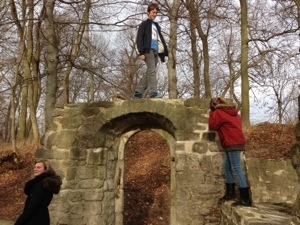 In Wittmar we were fairly close to the old border between East and West, so we got some modern history too.

We went on to an East German village, and that was pretty sad. Full of abandoned and dilapidated houses. Sabine told us that during the Cold War the East Germans hoarded everything they could get their hands on, including stones and bits of wood. They haven’t lost the habit. 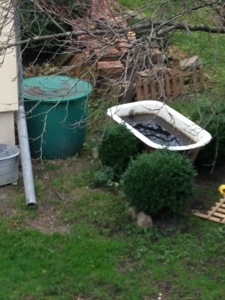 Even the village castle was mostly ruined, but partially inhabited. We didn’t see anyone outside at all. It did mean that the kids could climb on it without anyone looking sternly at them.

Of course Berlin is still shuddering with the war, it’s everywhere. There’s bullet holes everywhere you look. Buildings are still being rebuilt. This is a church, the spire has been half bombed off.

Everywhere we went was the small footnote, “this building is a reconstruction, it was flattened during the war”. I wonder if they just kept all the bits of each building in a pile and used the bits to rebuild? I’ll have to get a book. It must cost a fortune. The Berlin Dome looks convincingly old, though the original was only sixty years old when it was bombed. There seemed to have been a history in the city of each ruler knocking down works of the previous ones and building bigger and better versions.

And there’s the history they’ve pinched from elsewhere. We lined up for two hours to get into the Pergamon museum, losing a chance to go to Checkpoint Charlie, but inside they had this. 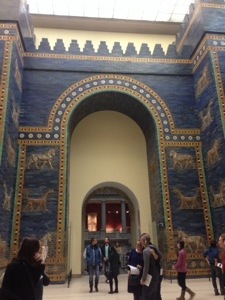 The Ishtar gate of Nebuchadnezzar’s Babylon. Oh yes indeed. Also this marketplace entranceway from ancient Pergamon, complete with a Greek inscription marking the spot of the barber. 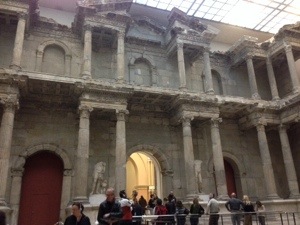 Come on Frank Lowy, surely you could fancy up the entrance to Westfield Burwood a bit. There was a ton of other stuff that they’d hauled out of the Middle East in container loads, the Moose was taking notes for the future when he does Ancient History. It was amazing.

One could go on about the history forever, but I’m moving on. I’m not bowled over by the local cuisine. I’ll show you a summary.

Can I just say that the specialty of Berlin is curry wurst? You know what that is? It’s a frankfurter cut up with curry sauce squirted on it. And the curry sauce tastes like tomato sauce with a bit of curry powder mixed into it. I have had some delicious meals here, you can do a lot with cabbage, and anything with venison is very good. Also there’s a lot of berries around the place. I wouldn’t actually kill for a pad Thai or some bok choy with oyster sauce, but I’d really like some. There’s a lot of pizza joints around. The Horror spotted some sushi places. We peeked at the menu of one and it did have sushi, but also tomato soup and chop suey, so I wasn’t convinced. I do love the bread here. I wonder what they do to it? I may have mentioned the beer.

We’re here in a mild winter, but it still means a fair old rug up to go outside, and a de rug once you get inside. The sky is very low. We like it because we’re on holidays, but it would be a bit depressing to live through. On the other hand, the rain is unconvincing, so you can still tourist in it and pretend it’s not happening. Apparently the winter does make summer a celebration.

Speaking of which, they do Christmas in style. I’ve never seen so many giant, beautifully decorated Christmas trees, even inside churches. I’ve told you about the Christmas markets, and something else I’m taking home is lit candles everywhere. You have to remember to blow them out before leaving the house. 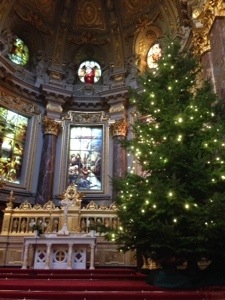 I’ve been very impressed by the environmental credentials of the country. There’s windmills all over the place, I think they look rather elegant, and depressed looking solar farms. I realise coal is cheap in Australia, but come on! We have so much more sunshine than here, it’s embarrassing that we don’t make more of an effort. A lot of takeaway places serve food and drinks in reusable cups and plates, you get a deposit back when you return them. That can’t be too hard either, can it?

So it has been terrific, and I want to come back. And next time, I want snow.

2 Comments to “Thoughts on Germany”