There are some beautiful sights to be seen in Munich. Many of them are in the Marienplatz, the square in front of a huge complex of buildings that appear to be the seat of government. Makes anything in Australia look very lame indeed. 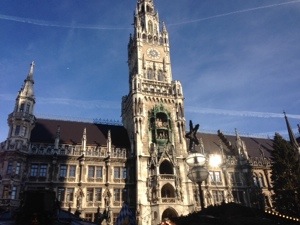 If you look closely you can see about half way up the tower is a two storey set of puppets. On the hour these perform a fairly basic show with bells accompanying that brings the square, already crowded with Christmas markets and their attendant shoppers, to a complete standstill. As my dear husband remarked, it isn’t going to replace television, but apparently it’s a must see and we saw it.

What was far more interesting is that you can catch a lift right up to just below the spire. I do think they should make tourists take the stairs, but anyway. The view on a clear day is spectacular, we could just make out the Alps in the distance. The detail in this place!

And everywhere really, I can’t get used to it.

Wouldn’t something like that be roped off in Australia? Yet it was just sticking out of a random wall.

But what Munich is about is the beer, and at some point you must inevitably go to a beer hall. We went to the Hofbraühaus which seats a touch over three thousand patrons at any one time. It’s a bit hard to judge exactly how old the place is, people have been drinking beer on this spot for a thousand years, but bits have been torn down, rebuilt, enlarged, moved a bit, bombed, burnt down and rebuilt some more. It’s old and it’s big, OK?

And order yourself a giant plate of meat and potatoes, some cabbage if you’re feeling like some kind of vegetarian hippie, and some beer. It comes in litre glasses. If you’re terribly wussy they do have one half litre option and something called Radler which is a shandy, but that only comes in litres too. The husband and I decided to share the original beer brewed on the premises.

The chap behind us ordered two as soon as he came in, one light and one dark. You never know when you’re going to be able to catch a waiter.

The Moose and I shared a green salad and what turned out to be two boiled veal sausages, which were a little salty but otherwise very nice. The Horror topped himself up with his current addiction of wiener sausages. It took us a few days to persuade him to try them, now that’s just about all he’ll eat. Muffet and the husband shared a large slab of roast suckling pig. Other tables tended towards giant bits of meat attached to what looked like a brontosaurus shin bone. It was all a bit Flintstones.

Dessert choices were limited, but the Horror was very pleased with his icecream, Muffet and Moose should really have shared the dumpling with vanilla sauce, it was bigger than their heads, and the husband and I shared this.

It was a Christmas special of gingerbread mousse, and what an interesting presentation, boys and girls.

We picked up some bread rolls and clementines for dinner, but couldn’t resist getting a couple of half litre bottles of a very pleasant beer for less than a euro each at the supermarket. I think it’s classed as a food group here.