When then hell are they inventing teleportation. Bugger education, I want government money thrown at dissembling humans and having them reassemble instantly on the other side of the planet. Let’s just say that getting to Europe from Australia is gruelling. The kids were very good, though.

We picked up a car from the airport and drove straight out to Eisenstadt to see our firstborn, the Moose who has been here for a week already on a music tour with his school, perform stuff at the Haydn Hall in the Esterhazy palace. Start with a bang, we thought. But first some lunch. We found a little cafe serving food, there’s lots that just do desserts, settled in, placed our orders, then came to the horrified realisation that You’re Allowed To Smoke In Restaurants in Europe. How uncivilised. The young girls at the table next to us only paused in their smoking to eat. However the first schnitzel of the tour was really excellent, thin, crisp, porky. We’ll have to try turkey schnitzel, that was the other option. Offsetting the smoking is that fact that they sell alcohol on the streets, presumably to stop you dying of exposure as you shop at the Christmas markets. I didn’t get any because I did feel like someone who hadn’t slept for forty eight hours and been subsequently run over by a tractor. Now wonder what the blood alcohol limit is for driving in Austria? Oh that’s right, we have wifi at this hotel, it’s the same as Australia.

Our first palace is the Esterhazy palace. We paid our four euros entry and fought through the Christmas shoppers up the stairs to be just in time for the wind orchestra’s performance. Located the Moose up the back on the triangle and waved frantically at him, causing him to grin broadly and possibly lose his place. I was so busy gazing at my first born that it took me a while to take in my surroundings. Muffet said “mum, look up!” Wow. Classical themed murals painted on the ceiling, been up there since the Baroque when the palace was built. They like their women pretty chunky back then.
. 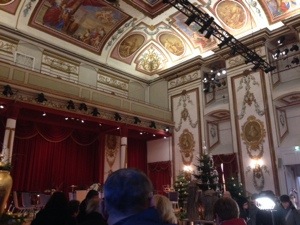 In between musical numbers we hired an English language tour of the castle and wandered around the rooms. It made us realise that this enormous place was actually someone’s home. In one room there was a painting on the wall of how the room was furnished when it was someone’s bedroom, and it was actually fairly stark. A single bed up against the wall, a desk and a couple of chairs, an ornate wooden stove and there were three doors leading out of it, as there were in most of the rooms. Not very cosy. And where did he keep his clothes? We realised the richness of the cultural heritage here by the fairly blasé way some of these treasures were displayed, no guards, no security cameras, no velvet ropes, some of the furniture you could touch.

I should also just mention for the benefit of my choir that the Hayden Hall has an incredible acoustic. Our choir director lived in Vienna for a number of years and would have come here often, no wonder he complains about the University Great Hall. The Hayden hall was full of stalls and Christmas shoppers, but when the school was performing you could hear every note from anywhere in the hall. The school music director actually walked around the room while they performed to test it, he couldn’t believe his ears. It was like the music was coming from above. Maybe the Grads should do a European tour.

It was all a bit much for the Horror. 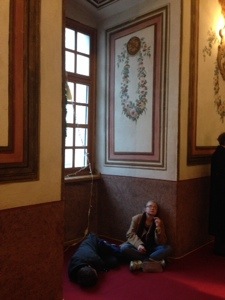 So we bundled them into the car and drove back to our Vienna hotel, the Classic, and it really is. Wood panelled, marble stairs, very cute indeed. Deposited them in bed, then went downstairs to investigate the tiny bar outside reception. Why do we not have more of these in Sydney? Just comfy chairs and people having one drink before going out for dinner, or in our case dragging ourselves upstairs to pass out for twelve hours. 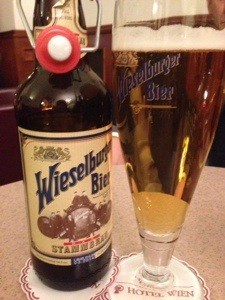