I’m averaging about one committee meeting a week at the moment. One likes to be involved with ones community, and for me joining committees is the form this takes. Tonight it’s the choir meeting, we’ll be chatting about superannuation and to whom it is paid, and accompanists, and how much do you pay a children’s choir and are we ever going to have a website, that kind of thing. These meetings are very kindly hosted by the choir president in her beautiful home, so one wishes to bring a little something to snack on, to keep up the energy levels and to soak up the white wine. I generally forget, and grab some dried fruit or a bottle of wine as I head out the door, but today I’m organised and I’ve made crackers.

There’s generally cheese at these binges, so I wanted something fairly unassuming and a bit dry. Cracker recipes seem to fall into two categories, flaky and cheesy, and dry and plain. I took a standard recipe and did this with it.

The suggestion was for 250 grams of flour. I have a Thermomix, as I may have mentioned once or twice, so I put one hundred grams of whole wheat in the jug and Thermomixed it into flour. 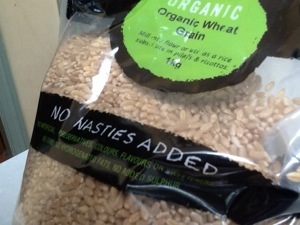 I actually put in the leaves of a couple of sprigs of rosemary too, but as you can’t taste them in the finished product, ignore that. Except to say that if you want a rosemary flavour you’re going to have to use a sprig longer than two centimetres.
Then added a hundred and fifty grams of plain white flour. And a teaspoon of baking powder. Add sixty grams of Pepe Saya butter and zap it until the mixture resembles breadcrumbs. Pour in a hundred grams of cold water and two tablespoons of poppy seeds and mix on reverse speed about three until the dough starts coming together. Dump half of it it onto a sheet of baking paper, add another sheet over the top and roll that dough out until it’s really thin. 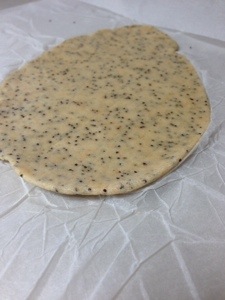 You could put the other half in the fridge meanwhile. Or you could not bother. Cut out lots of little shapes and put them on a baking paper lined biscuit tray. Sprinkle with salt, this is where you use your fancy salt. Do the same with the rest of the dough. You’re only doing it in two batches because it takes up so much bench space when you roll it out thin. Bake at 160 degrees for about twenty minutes, until they’re just starting to brown. 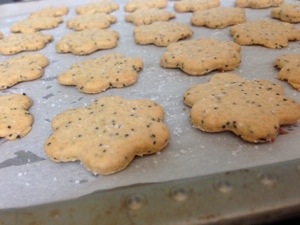 I tasted one and it was pretty much what I was after. I like the texture from the whole wheat, the poppy seeds and the ground salt. The flavour was suitably unassuming. Yet subtly moreish. I am really enjoying making cookie cutter biscuits, they look so neat! 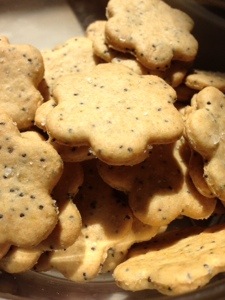 I’m also really enjoying having a break from being a committee treasurer this year. But I believe all that will change next week, at the Womyn’s Collective committee meeting. I’m a sucker for being treasurer.