What to do with Marshmallows with Issues – Iced VoVo Slice

One of the many things we learned while camping is that marshmallows aren’t as robust as they look. We brought along a couple of jumbo sized packets to roast over the campfire, but only got through half a packet before the total fire ban overtook us. We carelessly tossed aside both the opened and unopened packets and discovered as we were packing up that the contents of both packets had coalesced into one giant, ungainly confection.

Waste not, want not. It looked to me like I was going to make Iced VoVo slice. I was a bit stymied by the children never having heard of an Iced VoVo, what with their organic home baked hemp swaddled upbringing. I explained that it was a biscuit topped with jam, marshmallow and coconut. “Sounds weird”, they said as one.

You know I’m not an easy person to deter. First to find a suitable base. I chose Tish Boyle’s sweet pastry crust, and it goes like this.
Place one and a third cups of flour and 125 grams of cold butter in the Thermomix or inferior simulacrum. She also suggests a third of a cup of white sugar, but this is going to be pretty sweet with the jam and marshmallow, so I only put in two tablespoons. Zap it until the mixture resemble breadcrumbs. Add two teaspoons of cold water and a large egg yolk and zap again. Press into a lined roasting pan and bake for twenty minutes, until just starting to brown.

What to do with the marshmallow? I think I had about 200 grams in the opened packet. I put it in the Thermomix. 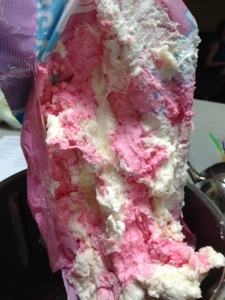 I tried just chopping it, but that just made more mess. So I put the temperature up to fifty degrees, the speed up to ten and whipped it for an amount of time that escapes my memory. Five minutes? Possibly ten? I peeked in the top and stopped it when there was a light pink shiny thing going on in there, instead of multicoloured glop.

I spread the cooked slice base with the last of my first experiment with strawberry jam, the one that wasn’t sweet enough and was too acid. It has featured in a few normal jam slices, but this may be its finest hour. I squodged the warm marshmallow on top of that, it was cool enough to spread out with my fingers. There may have been a bit too much marshmallow, if there is such a thing. I then pressed a whole lot of desiccated coconut on top, I felt that it needed a lot for texture and flavour. It did sink in quite well.

You want to wait until it’s well and truly cold, maybe even refrigerated, before you cut it because that marshmallow is STICKY.

The hordes didn’t really like their first piece. Outside their experience. Five to ten minutes later they wanted another bit, just to make sure. And now it’s all gone and they’re clamouring for more. Lucky I’ve got a whole ‘nother packet of marshmallows with issues.