What I’ve Learned about Camping. Part One. Setting Up.

Contrary to popular belief, it wasn’t my fault we’ve never gone camping. It just that in such an active family we’ve never managed to find a weekend that was completely and totally free of sport. When a long weekend loomed that had been reserved for a family event that was subsequently postponed the time seemed right. Ho for Glenworth Valley.

There appear to be two types of campers. One lot are after a cheap holiday, so they bring along all the comforts of home. A giant tent with multiple annexes. A folding pergola. Tables and chairs. Gas barbecues. Many lights. Flock lined inflatable air beds with pockets so they don’t fling you off if you roll over too incautiously in the night. Their own toilet paper.

And there’s the likes of us who are after the nature experience. I didn’t want to commit to camping too much in case we didn’t like it, so we made do with what we had. We hired a four man tent from reception and brought along a two man tent my husband has grimly retained since childhood in the unwavering knowledge that he would eventually have a family that he would definitely take camping one day. I’m not even sure it’s real tent. 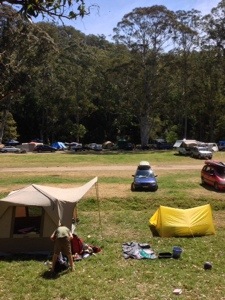 Yes, the banana yellow contraption. It wouldn’t sustain the onslaught of a swarm of monarch butterflies, so it was lucky there was no weather to speak of.

As it turned out, there was a third type camping at Glenworth Valley this weekend. “What’s Confest?” we asked our abseiling guide, Dean, after we’d passed the fourth sign for it. “Well, I don’t know what the C and the O stand for, but the N is for Nudist”, he explained. They were put in the most remote field available, but they still had to ignore utes full of gawkers on their way to abseiling, or kayakers, or the odd string of horse riders. It turns out the Confest is slightly more nuanced than that, but it was definitely a clothing optional event.

To the things I’ve learned. I’ve learned that a child can sleep quite comfortably on ground covered only by a doona, but an adult attempting the same feat becomes rather aware of their hips. A Thermarest or equivalent is the basic minimum requirement for a half decent night’ sleep. I wonder if a yoga mat would work?

I can light a fire.

My dear husband took one look at that and said “that’s never going to light”. What would he know. Nothing. In under five minutes that was a blazing inferno. But apparently I wouldn’t have earned the Scouts badge because I used three matches instead of one. Pfft.

One can make proper coffee camping.

It was more a proof of concept than anything else. We got that pot as a wedding present or something and it has rather languished at the back of the cupboard. I was certainly not going to be drinking instant even if we were going bush. It did work, the handle didn’t melt, but to took ages and was very very very strong. I thought getting a latte from the Glenworth Valley cafe was cheating.

An ablutions block is a marvelous thing to have available while camping. The one in our field was constructed of green powder coated corrugated iron, you pushed one button for a one minute warm shower and that’s really all you need. It was light and well constructed and had three hooks for your stuff and a soap dish and you couldn’t ask for a nicer fit out.

And finally a hammock is an excellent addition to any holiday. A few people brought their own, but we set up within easy reach of an existing one. 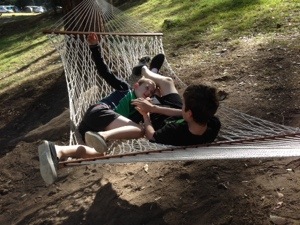 I’ll get on to the activities in my next post. Suffice to say they were many and varied.