I am getting to the stage where you’ve heard it all before. I am making lots of stuff, litres of strawberry jam, strawberry tea, jam slice (with the failed first batch of jam), raisin bread, but it’s all a bit fresh in the audience memory. So I’m going to talk about the cat.

I first suspected that something was wrong when he would stand in front of a toilet with the lid closed and make a sound like a toddler was tying his tail into a neat bow. He wanted to drink from the toilet. A lot. To the point where he’d actually nag you to get off the thing, are you going to spend all day there? Oh, we supply a bowl of water, but apparently it has dog germs. He was one thirsty cat.

So the vet did a thing where they deftly inserted a needle into him and withdrew some fluid ounces of urine. The urine was all wrong, Linus was in the early stages of renal failure. But don’t worry, they blithely reassured me. Give him these pills and this special food and you’ll have him for years to come! He’s already nearly fifteen. I’m still getting the stains out of the carpet from the last elderly cat we had on the premises. Years, hey. Hmm. That food is really expensive. 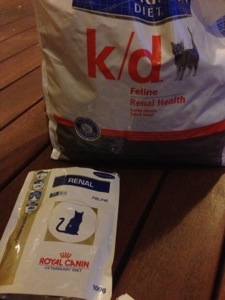 He liked the first sachet. But not the second, after I’d bought a case of the stuff. I’m not surprised, it looks like the sort of thing a small marsupial would produce after a night on the turps. 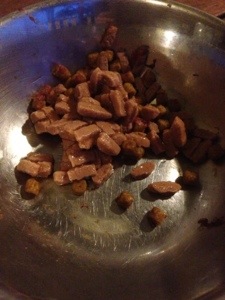 So I spent a few days trying to encourage him to eat it. “This is bogus”, he’d say. “Where’s the real food?” 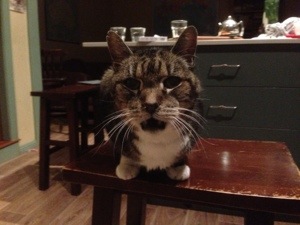 He’d also stick his claws into me quite a lot. The dogs, on the other hand, thought the stuff was delicious, so I’d have to guard Linus every time he wanted to eat, which was every ten minutes. So very irksome. So I looked up do it yourself renal care food. Wow, too complex, and I don’t know if I’d like to risk grinding chicken bones in the Thermomix. So many supplements, and who knows if you’d get the balance right? Question, what would he be eating in the wild? Answer, nothing, he’d be dead. And guess what my research also uncovered? A cat will actually starve itself to death if it doesn’t approve of the food choices its human is making for it. I’ve had cats all my life, this really shouldn’t come as a surprise.

So for the moment we’re going with a compromise. He gets the pill, that’s not a problem. I mix some marsupial poop with the renal kibble and a scoop of delicious kangaroo meat, his previous high protein diet. Human grade too, sometimes I suspect the pet grade stuff is just sawdust soaked in blood. He’s stopped sticking his claws into me quite as much. 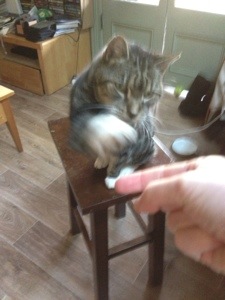 He’s not nagging people to stop using in his water bowl as a toilet any more. This may just work.