I know you’ve been on the edge of your armchairs, wondering how the muttering bathroom renovation has been coming along. Are they able to ablute inside yet? Would it be safe to go near them in warm weather?

I’ve been trying not to think about it, because it causes me to clutch at my hair and mess up its perfect symmetry ahahaha. I ordered all the bits early in April. Early in May the kitchen company indicated they were ready to go ahead. I called the supply place, My Bathroom and Tile Centre in Drummoyne, if you’re looking for someone to avoid, who had indicated they’d like a week’s notice. They were getting two weeks. And that’s where it all started to come unstuck.

Well, you’ve heard most of it. Only delivering half the tiles. Forgetting to bring the bath waste. None of the tradesmen turning up at the advised time, mostly late, but some early. Discovering that the existing bathroom drain was actually just a hole in the floor and not even at the lowest point. And the towel rails. Oh, the saga of the towel rails. First they had just forgotten to bring them. Then they were the wrong ones. Then they weren’t ready. I suspect they just forgot to order them, actually. Then it was going to be six weeks, because they were being hand plated by specially imported Irish leprechauns who only worked under the light of a full moon. Then it was going to be another six weeks, because they’d delivered one brand new shiny one and one battered one in a dusty box. Well they finally turned up yesterday, and here they are. 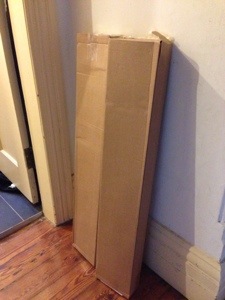 Aren’t they beautiful. And I had an added bonus today. A phone call from My Bathroom and Tile, almost exactly a month after they said the shower screen would be ready in a week. Where was I this morning? Well, a spot of gym, some shopping, that kind of thing. The shower screen people had popped by and were less than gruntled to miss me. I tactfully suggested that as they’d advised it would be installed on Wednesday, that being tomorrow, I hadn’t stuck to the premises like I had on so many other days, waiting, waiting, waiting for that next tiny step forward towards a working bathroom. Stick around, they suggested. Sure enough, miraculously before school pickup time, I finally had a shower screen. 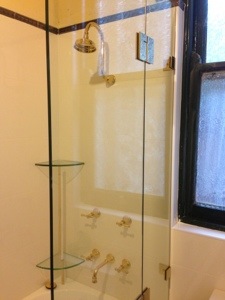 Complete with a five year warranty, in case it explodes in the night like that of a good friend. You hear all the horror stories when you renovate. “Don’t touch it for twenty four hours or it will leak everywhere”, they suggested. What a tease. But it does mean that tomorrow night it will be possible to shower indoors without soaking the entire room for the first time since we moved into this place twelve years ago come Lammas Eve. Or thereabouts.

You know, when I think about it, most of my troubles come from the fact that I foolishly asked for my metal accents to be gold rather than chrome. I live in a house that celebrates its hundredth birthday this year. We have lights that turn on by pulling a string. In two of the rooms we still have gorgeously ornamented gas light fittings. I can’t have a bathroom that looks like something out a spaceship. But I wish they’d warned me that I would pay for being so very difficult, I might have just gone and bought all my fittings off the shelf at Recollections. Be warned. Learn from my tale of woe. Though, on the bright side, I may have a finished bathroom by the end of the week, and then all of the lies and disappointments will fade quickly into the past. First world problem? It’s up there.