I’ve made some Thermomix inspired improvements to the humble corn fritters that form about a monthly addition to the diet of my children. The original recipe that I seem to recall blogging about some time ago is basically a savoury pikelet with some corn added. See how far we’ve come.

I start off with buckwheat. 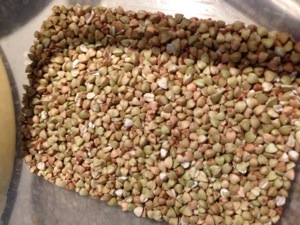 My source for this is The Source in Balmain, now that I’m getting less scared of parking in that fashionable suburb. You can buy buckwheat flour if you don’t have the means of grinding it, or The Source will actually grind it for you. I put a cup in the Thermomix and zap at high speed for about a minute. Add a four hundred and ten gram tin of corn (that’s an odd weight, doesn’t it sound converted from a pound? Close, but no cigar). And an egg. 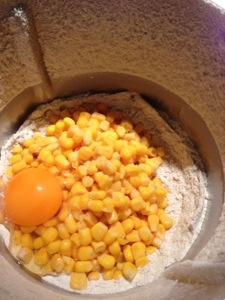 I also put in a container of cheese that I’d Thermomixed for pizza, a mix of cheddar, mozzarella and Parmesan. I’m really going to have to do some kind of analysis on how much cheaper is it to do your own processing of things like pizza cheese, or making yoghurt. I’m getting the feeling I’m saving quite a few bucks. And those of you out there trying to justify buying one might appreciate it. 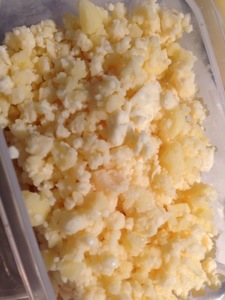 Also four teaspoons of baking powder. Then enough buttermilk to make a thick batter. You mix it in the Thermomix on reverse speed two and pour the buttermilk through the lid, peeking to see what consistency you’re up to. Leave it for a bit while you go and compose a riveting email to your husband about superannuation.

Heat some fat in a frying pan, I’m using some chicken fat I saved from our last chicken roast. Gosh I’m getting frugal. Put soup spoons of batter in the pan, turning when some bubbles start appearing
on the surface. You want them all golden.

They’ve got a richer, nuttier flavour than the pikelet version. It doesn’t taste wholemeal at all. The baking powder and buttermilk makes it fluffy. Don’t tell the Moose it has cheese in it, he thinks he doesn’t like melted cheese. Rubbish, of course, everyone likes melted cheese.