Ninjabread Men, the Agony and the Ecstasy

I started something in 2002. Something of which I in no way understood the ramifications. I sent my son, the incipient Moose, to preschool with gingerbread men on his birthday.

The advantage of a winter baby is that you get a few months to see how the whole birthday thing works. Where the parties are held, how many are invited, do the parents stick around, that kind of thing. There was also what to do on your actual birthday, and that was to bring in something delicious to eat to share with the class. Through close observation I noticed that the preschool staff were least keen on a whole cake. You have to work out how many kids there are, cut the cake in that many pieces, find plates, clean up cake slice stumps after. It’s a palaver. To earn brownie points you work out for yourself how many are in the class, add teachers and admin staff, deduct the allergy kids, and send in something in individual portions. Like cupcakes. Or, in our case, gingerbread men. My kids aren’t that keen on cupcakes.

Little realising that I’d let myself in for a lifetime of gingerbread man making. The actual recipe isn’t hard, I’ll give you that in a minute. It’s the converting them into men that’s a very very tedious job, thank goodness I only have three kids. The Moose is at a stage where it’s lame to bring in cake for the class, but he won’t say no to a box of Snickerdoodles. At a girls school baked goods are never lame, but the Muffet now prefers to bring in a couple of trays of raspberry slice. It’s only the Horror from Outer Space who still needs gingerbread men. Only, a few years ago I found these cutters.

So now they’re ninjabread men. I’ve also seen zombie cutters, but that isn’t fun to say and they just look like you’ve been careless cutting out your men. I’m sticking with the ninjas.

“How many do you want?” I really have to ask, not wanting to know. “We’ll, there’s everyone in my class, that’s twenty five, and my friends who aren’t in my class, and my teacher and my bassoon teacher and I have Art, so the art teacher. And I’d like to have two. What about fifty?” Shudder. From much experience I know that the recipe reliably makes twenty four, so to be on the safe side I’d better make a triple recipe. The KitchenAid is up to its apricots in it, if you’ll excuse a Bazza McKenzie phrase.

I’ll give you the amounts for one recipe. Cream together 125 grams of butter with half a cup of brown sugar and a tablespoon of ground ginger. Beat in half a cup of golden syrup and an egg. Mix in two and a half cups of flour and a teaspoon of bicarbonate of soda. Press the dough into a ball, wrap it in Gladwrap and stick it in the fridge while you go pick up the Muffet from school.

Upon your return, place a large sheet of baking paper on your workbench, slap the dough on top of it and put another piece of paper on top of that. It’s a fairly sticky dough, but you don’t want to work more flour into it. Roll it out to about a centimetre thickness. Then you start stamping out those suckers and putting them on a lined baking tray. The bit I really regret starting is decorating them with silver cachous. 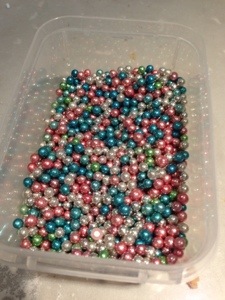 Two for the eyes and three for buttons. Fifty times. I managed to bake one sheet and get another in the oven before I had to pick up the Horror from basketball. One more as I made him and his sister dinner, before I went up to the Moose’s school to listen to the Languages Poetry competition. Don’t ask. But he was very good, I was very proud of his Latin pronunciation and the way he didn’t pace a twenty metre track as he recited like he did while practicing at home. He didn’t win. Then another sheet before bed, and we got up to fifty. I still have some dough left to make some more, and I will, really, I just need a day off from those eyes. Those many glittering eyes.

One Comment to “Ninjabread Men, the Agony and the Ecstasy”