You’re not going to get a blow by blow account of this holiday, dear reader, because we’re at the highest ski resort in Australia and there isn’t any phone reception. None at all. Except at the top of the T bar and if you think I’m going to blog from there, you have another think coming. So we’ve forked out for twenty five minutes of wifi so the husband can check his emails and the Muffet can water her virtual plants.

The one hundred and fifty people who warned me to be careful of my ankle will be greatly relieved to hear I’m still on two feet. Though I do emit small cries of anguish while going up the stairs, but that’d be knees, not ankles. They’ll recover as soon as I stop skiing, and the pain is greatly alleviated by alcohol. You’ll also be pleased to see that there’s enough snow.

There’s a fair bit of shrubbery poking through it, but that’s fairly soft. I’m working on my technique, especially as there’s a couple here that we know who look like something out of a Larry Adler commercial, skis always together, always have their weight on the uphill ski. They make an almost vertical slope look like a stroll down to the shops, rather than the crouching, flailing, clouds of snow, adrenaline pumping epic adventure I make of it. I’m taking on board some advice the Horror’s instructor gave him. He said imagine there’s a killer worm in you boots. You need to squash him against the front if your boots before he wriggles up and eats your knees. Squash that worm.

We’re also prepared for the conditions. It’s pretty fabulous up here at the moment, but the temperature hasn’t got above zero yet. You want all you skin covered.

I’ve also learnt a valuable lesson from the children. If they say “hey Mum, I’ve found a great new way through the trees!”, on no account follow them. Death and despair and getting your skis stuck in a snowdrift when you panic and veer away from a jump will follow.

Look how beautiful it is up at the top of the chairlift. 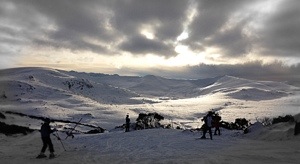 That’s after you finally get up here. It’s never crowded at Charlotte’s Pass, so the lifties are very kind and slow down or stop the chairlift for young kids, slowboarders, nervous nannas, anyone really. Instead of mowing them down like they do at more commercial resorts.

Well I’ve checked the kids into kids dinner, us adults get a three course dinner while they watch some lame fairy movie, as the Moose would put it. All I need to do is put on my shoes and howl my way down two flights of stairs. I do love skiing, especially at Charlotte’s. I just wish my joints would stop acting their age.