You’d think with the number of unfinished projects I have going that the last thing I should do is go to a craft show. I’ve got two unfinished handbags, one started immediately after the last Craft and Quilt Show, a knitted strap for one of the handbags, two necklaces on the go and a vintage velvet dress that needs altering. I was very firm with myself yesterday and made myself finish one thing before loading up with more craft. I bought a vintage brocade jacket and last week’s farmers market and I spent twenty minutes yesterday taking it in so it didn’t look so much like a curtain with sleeves. I thought it would take much longer, I’m extremely pleased with it and wore it today. One can never have enough craft.

Also the planets were aligned. The bathroom chaps have decided to have yet another day off before being able to psych themselves up sufficiently to screw the vanity to the wall. I had a doctors’s appointment in the morning very close to the light rail station. I’ve been given instructions on how to make an easy beanie using a gauge of wool and needles that I just don’t have. I need a little more embellishment for my unfinished handbags. It was meant to be. The only thing that slowed me down a little was the doctor surprised my whipping out a horse sized needle and giving me another cortisone injection to the ankle. Of all the enormous variety of needles I’ve had stuck in me, the ones on the bone are my very least favourite. I decided to ignore my whimpering joint and press on.

The Craft and Quilt show has become the biggest of the craft events during the year. I hear that the Bead and Gem show isn’t even going ahead in Sydney this year, it seems that beading is in decline. There was a small selection of beading shops at the show, but I’m pretty happy with my US suppliers and am well stocked up at the moment, so only gave them a cursory glance. Fibres, scrap booking and quilting is what this show’s about, and look at the queue!

That wasn’t even opening time. Apparently when females retire, they join a choir and take up a craft, then come to these shows. I’m a bit ahead of myself.

Did you know there are craft guilds! They had stalls here today. 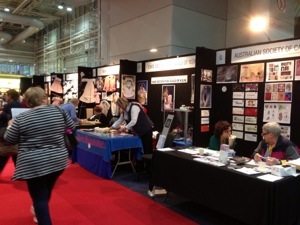 Smockers, machine knitters, calligraphers, spinners (with an actual spinning wheel!), take your pick. I can’t, I’m somewhat promiscuous in my crafting. I have decided that I’d rather like to learn to crochet, so I picked up some books on that. Wow, there are a lot of crafting books. I almost bought a fabulous looking book on how to make handbags, but when the introductory list of what equipment you need went over two pages I put it down, feeling rather inadequate. I think I’ll continue to wing it in that department and cover up imperfections with embellishments. There were books on cake decorating and knitting flowers, and sewing outfits for your dog, most of them very specific. Ideal for the crowd here.

I particularly like the range of fibres on offer at this show. Fat quarters do nothing for me, and my sewing isn’t yet at a stage where I’ll need anything I can’t get at Spotlight. I don’t know if you’ve noticed, but there are a lot less haberdashers around the place than there used to be and it’s very difficult to find a shop where you can buy quality wool. At the show there was possum wool, alpaca, merino, silk and cotton, multicoloured, fluffy, that funny one you knit into spirals, metallic crochet thread (next year), imported, homespun and every colour. I got the knitting needles I need for the beanie, a crochet needle from Prudence Mapstone herself, and three kinds of twelve ply wool.

Now where do I start? Should I be disciplined and at least finish the black and white necklace? Surely crocheting one Afghan square wont hurt. Or doing a test beanie with wool I already have, rather than this fancy new wool. I’ll put off the decision til tomorrow and meanwhile roll one of the skeins into a ball.

I’ll have plenty of time tomorrow, my ankle tells me we’re not going anywhere for a couple of days.

2 Comments to “Craft and Quilt Show”