If you have a house full of thirteen and fourteen year old boys who’ve had very little sleep and have spent a lot more time outside than they normally would, they’re going to take a fair bit of breakfast to stop them eating the cat. You need buckwheat pancakes. And lots of them.

Those of us with a Thermomix can start with buckwheat. You can get buckwheat grain from Honest to Goodness. If I’d thought about it, I would have ground up the whole half kilo of buckwheat to start off with. You stick it in the jug and set to the highest speed and leave it for about thirty seconds. You’ll have to expect that the boys will be turning up the volume on their laptops so you won’t drown out the amusement of mychonny on YouTube. Decant the buckwheat flour out into a bowl.

To make one serving of pancakes, put in the Thermomix jug one cup of buckwheat flour, one cup of white flour, two tablespoons of raw sugar, one teaspoon of bicarbonate of soda, two teaspoons of baking powder, half a teaspoon of salt, one cup of buttermilk, one cup of milk and two eggs. Zap it on speed five for about twenty seconds. Peek in the lid to make sure it’s mixed. Meanwhile you have heated up your frying pan with a knob of homemade butter in it. Once the butter is bubbling you pour a circle of pancake batter into the pan. When bubbles appear on the top of the batter, flip the pancake.

That jug makes seven or eight large pancakes, which isn’t even going to stick their sides. You may want to consider having two frying pans going. It wasn’t until the third jug that the parents were able to sneak one. They’re thick and flavoursome pancake, a little brown from the buckwheat, but didn’t taste wholemeal or worthy or anything.

I put out maple syrup, honey, cinnamon sugar, butter, jam, lime wedges and a bowl of sugar to have with the pancakes. Who would have thought cats like sugar? 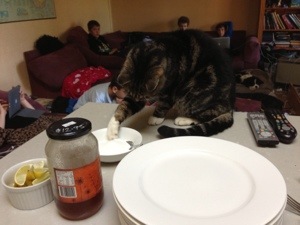 Perfect fuel for a morning of laser wars.