Do all tradies smoke? Are they given a carton of Winnie Reds at the beginning of their apprenticeship? Are there courses at TAFE on how to suck on a fag while checking your texts? Anyway, all the ones that have been involved in my bathroom so far have been. Even the suave purveyor of fine bathroom products, who used to be in the bathroom building business himself. Actually, I tell a lie. Crystal, the site supervisor, doesn’t appear to. She used to sell bathroom products, but got into bathroom building. Bathrooms seem to be a thing that doesn’t let you go. Can’t understand it myself.

You’ll be pleased to know that the bathroom bits and pieces have arrived. I keep looking at the new bath, perched as it is on a box on the verandah. Is it smaller than the old one? The measurement says I should be able to lie down in it, but it looks small to me. Then again, the Muffet thinks it’s bigger than the last one. All a matter of perspective.

Jack hammering off all the tiles in the bathroom had its consequences. It’s opened up a Dr Who style crack in the Muffet’s bedroom that she’s trying not to think about. 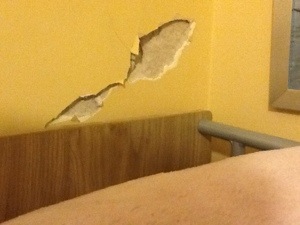 The bricks around the shower seem to be in the last stages of collapse. 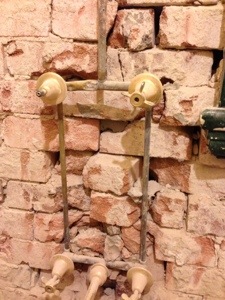 Crystal assures me she sees this all the time. She tells me that it’s only the outer lining of bricks in a double brick house that are sturdy, the inner layer are just… She waves her hands about. Not terribly reassuring.

We had the renderers today. It’s not a terribly large bathroom, yet they’d crammed in a work table and two workers in there, wedged in by a wheelbarrow full of cement.

There was a lot of grunting and puffing and slapping about of cement. I think they’d puff less if they cut back on the fags. Apparently they were able to cobble the brickwork back together again. They did forget to take off the window architrave, as had the demolition crew before them. The unflappable Crystal assures me that the next lot will sort it. I’m guessing they also meant to leave the door off.

Four days into the job and we’re two days behind schedule. Lucky I’ve got another bathroom to ablute in. Meanwhile I’ve got all the doors and windows open to try to get rid of the fug of smoky, dusty, hardworking tradesmen. Should be fresh again by Monday.