It is porridge weather in the good old Ney of Syd. I know I’ve told you about Nepalese porridge before, but the Thermomix has taken it to new heights. It may be the perfect breakfast.

Cut a small Granny Smith apple in half and remove the seedy bit. Toss in the Thermomix jug. Add a handful of coconut flakes and a handful of hazelnuts. I do love hazelnuts. Zap very briefly. My Thermomix was so surprised that it threw the little plastic cup that goes in the lid into the toaster, but stand firm. You want it to go from this

To this. It should only take a couple of second, you don’t want to pulverise it. 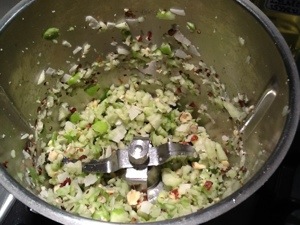 Add in half a teaspoon of cinnamon, thirty grams of rolled oats and thirty grams of rolled spelt flakes, or all oats if you haven’t popped into the health food shop lately. Add three hundred grams of water and cook at 90 degrees on reverse speed two for about eight minutes. It looks a bit watery at first but firms up almost immediately. Sling it into a bowl and drizzle over a suspicion of maple syrup. 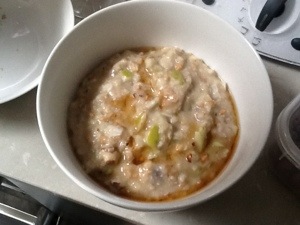 Gosh it was nice. And it didn’t turn into a cannon ball in my stomach, which is a first for porridge. It may have been the spelt, which is why I was using it. Or it may have been because I was dicing with the unknown and using Unstabilised Rolled Oats. 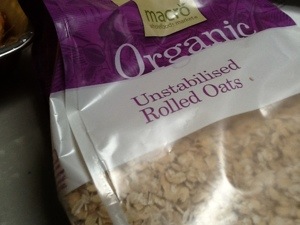 Unstabilised! Anything could happen! Look out, she’s gonna blow!

Also, clean up your jug quickly, that stuff sets like concrete.