Just so you don’t roll your eyes, this one can also be done in a blender. No matter what you think of his ghastly hairdo, Neil Perry can certainly give you a fair indication of what should go into a wonton wrapper and he shared a tasty looking recipe in this week’s Good Living which I immediately sucked into my recipe app. I don’t really have my Asian palate going yet, so I’m still taking fairly careful direction on ingredients.

First you collect your ingredients. I put the following in the Thermomix, two cloves of garlic, a tablespoon of dark soy sauce, a teaspoon of sesame oil, a centimetre of sliced ginger root, an ice cube of coriander chopped, a green onion chopped, about ten centimetres off the end of a stale bread roll and a pinch of salt. I zapped it to form a paste. Then it was suggested I add a one hundred gram tin of water chestnuts. I had a two hundred and thirty gram tin (which I actually had to open with a can opener!), but when I weighed the chestnuts they came to about a hundred and twenty grams, so put all of that in. Also put in three hundred grams of frozen green prawns, I really must thank Daniela for making me buy a kilo bag of frozen prawns, it has been so handy. The Thermomix made short work of that, but unless you’d like your blender to take a short holiday back to the land of warranty you may wish to defrost the prawns first. I only put it on speed five for about twenty seconds, I didn’t want a mush.

I happened to have a packet of Double Merino wonton wrappers in the fridge. I wonder what they mean by double merino? Twice the sheep? Anyway, despite the packet saying contains forty wrappers, only thirty two transpired, meaning either I’m not very good at peeling them off, or they’re selling them by weight. Thirty two was the perfect amount for a heaped teaspoon of filling each.

Neil Perry suggests moistening the edges of the wrappers with egg whites before pressing them together. I think this means that he has a kitchen full of slaveys, so I just went with fingers dipped in water. I got a kind of technique going in the end. 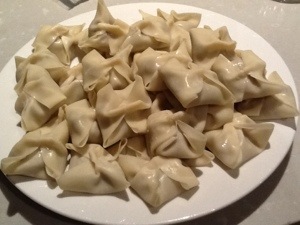 It only took about twenty minutes to fill them all, maybe less, I had a phone call from my in laws in the middle of my production line. Now the question is how to cook them?
I’ve only got two options open to me at the moment, as I’ve run out of spray olive oil. I tried frying them first in peanut oil. I generally don’t do this because I never know what to do with the excess oil afterwards. I shall try pouring it on the annoying weeds that infest the side of the house.

They kept their shape and were cooked through and pleasingly crunchy. I thought that the filling was a little delicate for this kind of treatment, so I had a go at boiling them. 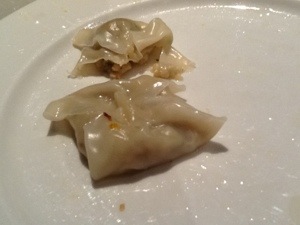 They’re not terribly visually appealing this way, but I like them better. I think the best way would be to spray them with oil and bake them, so I’m storing most of them in ziplock bags for another time. I feel like it could have done with a little more prawn, so next time I might increase it to five hundred grams (and make sure I have enough wrappers), or reduce everything else. The biggest surprise was that they didn’t fall apart with either method of cooking, they really make those wrappers tough and are clearly made for people who don’t have kitchens full of slaveys, but can only dream about it.

One Comment to “Neil Perry’s Prawn Wontons in the Thermomix”