I’m taking advantage of the absence of the Muffet to cook one of the many species she objects to us eating. Actually, I’m not sure how she’d feel about this one, having a bit of a hate hate relationship with the goat that resides at pony camp where she spends as much of her holidays as she can. He’s one of those narrow eyed goats that likes to sneak up on horse mad girls and butt them in the butt, then retires to snigger into his beard. Eating him may be taking revenge too far for her.

My favourite butcher stocks goat, and not only that, it’s all chopped up into manageable sized pieces and lavishly marinated. Actually, hacked up may be more accurate, in the kilo bag I bought today there were all varieties of rib, a chunk of thigh and what may have been a bit of rump. Perhaps they’re training their apprentices on the goat. I’ve been trying to pick what’s in the marinade, I could see dates and dried apricots and pine nuts and I’m guessing olive oil and a Moroccan spice paste. Half the price of the lamb, so I’m not complaining.

They suggested slow cooking the goat, and it’s getting to be that kind of weather. I packed the pieces into a frying pan and browned them first. 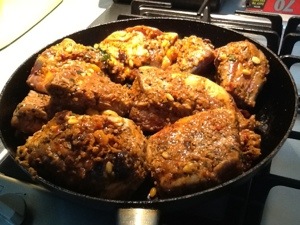 Then I put then in a roasting pan and covered it with foil. That went into the oven on 140 degrees for two hours, then I turned off the oven and let it sit for an hour.

You have to know your audience. This will be consumed by a man who has just come in from an hour and a half of coaching soccer to twelve little boys who haven’t seen each other for days in the dark and cold with the wind coming straight off the bay. He doesn’t want to muck around picking fragments of meat off bits of bone and sinew, he want to shovel it in while it’s hot, preferably accompanied by a large glass of red. So I picked the meat off the bones, and there was more than I expected.

It’s only by an iron exercise of will and a handful of cooking chocolate that I can stop myself from a fairly large scoff of this stuff, it’s delicious. Dark, tender, flavoursome. Not gamey, more like a beef shank or cheek than anything I can think of. I was planning to serve it with couscous, spinach and feta, as being culinarily related, but it’s too salty to put with feta, so I’ll leave that for another day. Not that I usually mess with presentation, but I think if I cook the couscous, then stir through some baby spinach and diced red capsicum at the last minute with the reheated goat on top it will look rather appetising.