Chilli Garlic Prawns – Kind of in the Thermomix

The joy of having a good friend and neighbour take you shopping because you’re on crutches is that you see products you’ve never considered before. I knew that the prawns you see at the fishmongers are all defrosted because the little so and sos are frozen as soon as they’re caught. I’m not sure if they’re also peeled at that point, but I’ll try not to think about it too hard. So it makes sense to buy a kilo bag of frozen prawns and have them on hand whenever you feel like making chilli prawns.

I don’t know about you, but I often burn the garlic. Not any more! With a Thermomix you put your flavours in the jug, so

In this case four cloves of garlic, three chillies from the garden, a couple of bunches of tired coriander and a slice of butter. I’m still experimenting with chop first, cook later or contrariwise. I tried cook first, chop later and I don’t think it’s quite right. I cooked it for two minutes at 100 degrees on speed three, then chopped it and got a lovely decoration of the jug walls.

The kit comes with a very well designed spatula, so I scraped down the walls and chopped a couple more times, and it all seemed OK. I added six of Frank’s locally grown tomatoes and cooked at 100 degrees on speed two for ten minutes, then added a pinch of salt and chopped to make a very fragrant sauce.

What you can then do is tip the sauce out, half fill the jug with water and cook the rice in the steam basket while cooking the prawns and bok choy on the Varona above the rice, then assemble at the end. I’m not going to do this. I have my prawns defrosting in the wok and have tipped the sauce over them. 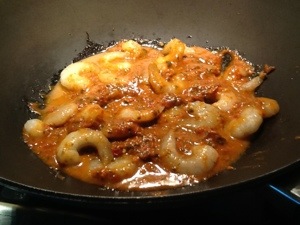 The hungry husband isn’t due home from the Jedi’s soccer training until about ten minutes after seven thirty. So at about seven twenty five I will half fill the still saucy jug with water and cook the rice in the steamer basket for fourteen minutes. Meanwhile I will be stir frying the prawns in the sauce with chopped bok choy just for a couple of minutes and the sauce will reduce down a bit and flavour the prawns. Sometimes I stir the rice in so it absorbs the sauce, but it looks better served on top of the rice, so that’s what I’ll do tonight.

I might add another chilli. Of course, that will require it to be served with a cheeky Chardonnay, but it can’t be helped.