Deconstructed Sushi – in the Thermomix

I have used the Thermomix for all kinds of things in the five days I’ve had it. Not for dinner though. Tonight was the night. I’ve blogged about deconstructed sushi for dinner. It was the perfect proof of concept.

Normally this dinner involves cooking salmon wrapped in foil in the oven. Rice in the rice cooker. Omelette in the frying pan. And the rest is raw, so lets not bother with that. Here’s how you do it in the Thermomix.

Place the lid on the bowl. Place the Varona basket over the lid. Put two slabs of salmon in the basket. 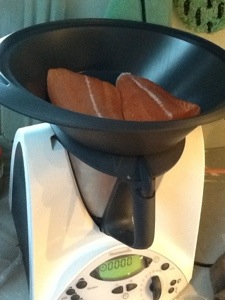 If you were cooking for anyone mildly adventurous, you could have whipped up some ginger, shallots and garlic prior to filling up the bowl with water, then rubbed it over the salmon. However. There’s a steamer plate for the Varona that goes over the basket. Line that with baking paper. Pour over a couple of eggs beaten with a bit of soy sauce and sugar. Curse a little as they drip over the edge of the paper because you’ve been a bit frugal with it. Bend the paper into more of a bowl shape. 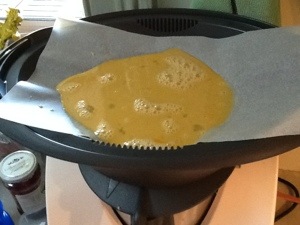 Bung on the lid. Cook the lot for fifteen minutes at Varoma temperature on speed four.

Well, it all worked. Not sure how much I like the look of a steamed omelette, but it tastes fine. The salmon and rice were cooked properly. It sounds like a bit of palaver, but it’s just a stack of steamers, all of which go in the dishwasher, so hurrah from my washing up team who can have the night off.

Preparation time was about five minutes, cooking time fifteen, which I spent cutting up the raw veggies, so that could be the quickest dinner I’ve ever prepared. The machine is a little noisy for what it’s doing, which is just heating up and sloshing around water. And I don’t like the name Varoma. It doesn’t really reflect what the thing is, and sounds a bit like a feminine hygiene product. I guess it needs a name. Steamer? That’s almost as bad. OK, marketing is difficult. Minor quibbles really. This is definitely my preferred rice and fish preparation method from now on. Might stick to doing omelette in the frying pan, just for textural reasons. Yes, yes, I am having fun.