I don’t get out much. There’s quite a lot of kid driving, food shopping, food preparation, washing and spreadsheet wrangling for my various committees in my life. So an invitation to lunch in the city with my busy husband was a very bright spot in the diary. I put on a frock, some lipstick, shoes that weren’t thongs and even some product in my hair so I didn’t bear as much resemblance to a poodle attacked with a scourer as I usually do. And caught the train into the City of Sydney.

Now we did have delightful time, but that’s not what I’m going to tell you about. On our way to lunch we saw a swarm of bees making themselves at home under the glass eaves of the Dior shop right near Pitt Street Mall.

I wanted to pause for a while to watch the startled reactions of passersby who, intent on their phones, suddenly found their eyebrows full of bees, but we didn’t have all day. On our way back we saw that someone had thoughtfully barricaded off the footpath under the swarm zone. I had to know more.

So after delivering my husband safely back to his skyscraper I hurried back to the action and was delighted to find that Shaun the Bee Man had arrived and was taking control of the situation. 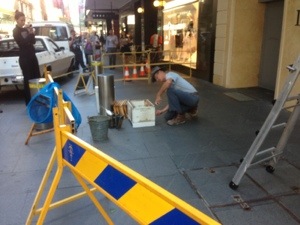 He had a partner who looked far more prepared for the job than Shaun, but he turned out to be a mere offsider, almost superfluous to the operation despite his impressive suit. 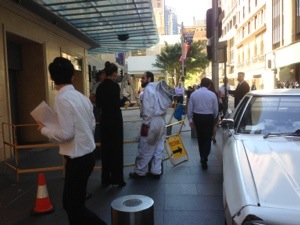 He made it look so simple. He merely puffed some smoke at the bees, ascended a ladder and scraped them into a bee box WITH HIS BARE HANDS. 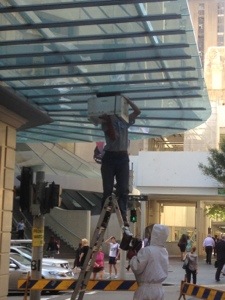 His only audience that stayed for the whole show were me and a couple of English backpackers, who agreed with me that it was the most amazing thing we’d see all week. Come on, week, prove me wrong.