It’s been a long day, and I’m now officially only treasurer for one organisation again. I could blog about the Oscars, but I didn’t watch them and haven’t seen any of the movies nominated except The Hobbit. I think Twitter does a pretty good summary, and it really looks like metallic is having a moment, doesn’t it? I wish velvet would, also fluffy hair, but heigh ho.

What I wanted to tell you about was that I’ve had another crack at chocolate peppermint slice, and I really think I’m getting there. I’ve done more of a pastry base this time, with a kneaded peppermint fondant and a much harder chocolate topping. I’m also rather pleased to have come up with a recipe that uses one egg white and one egg yolk, I never get around to using leftover egg components.

The base is adapted from one in my perennial favourites, The Good Cookie. They suggest it as a good base for slices, and they’re right. You put in your mixing bowl one cup of flour, one third of a cup of caster sugar, one third of a cup of cocoa powder and 125 grams of cold butter and mix it until the whole lot resembles breadcrumbs. You then chuck in an egg yolk and two teaspoons of cold water and mix until the whole lot starts to come together in a dough like fashion. Press it into a baking paper lined slice tray and bake for about twenty five minutes. If you weren’t doing a chocolate base, you’d use one and a third cups of flour and no cocoa powder, and would probably add in half a teaspoon of vanilla essence and you could also bake until it starts to brown, but you’re not and you can’t, so don’t.

Meanwhile make the peppermint fondant. Beat the leftover egg white until soft peaks start to form, or you get bored, whichever comes first. Beat in two cups of icing sugar. Add in some peppermint essence. I used half a teaspoon, but next time I’ll go crazy and use a whole teaspoon. The fondant will taste minty enough on its own with half a teaspoon of essence, but I think you need more to go with the chocolate. You will have formed a soft dough, which you turn out onto your bench top and sprinkle it with more icing sugar. Knead it like bread dough, you’ll be dissolving the sugar crystals and making a smoother feeling mint layer. Press it onto the cooled base.

I would then leave it lying about somewhere for a few hours, or overnight. Somewhere the ants can’t get to it. The mint layer dries out, which is what I’m after, you may prefer it wetter. Then you spread it with 170 grams of dark chocolate melted together with thirty grams of butter. Harmonie, not Pepe Saya. It’s turned out to be a pretty good ratio, it gives a chocolate layer you can cut without shattering, but not too melty. I would usually melt the chocolate with the butter in a heatproof bowl over boiling water, but I got a bit daring and did it over a low flame in a little glass saucepan, stirring constantly. I got away with it too, and it was easier to scrape out of the saucepan. With the heatproof bowl I never feel I can get all the chocolate out, I have to wait for it to set and then scrape it out and eat it with a teaspoon and that sets a bad example for the children. 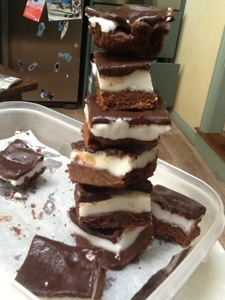 Perhaps not quite the canonical recipe yet, but much closer.