A Day at the Town Hall

Well I couldn’t call this blog The Messiah, could I, that would be giving entirely the wrong impression. It’s a wonderful thing to attend a big concert at a beautiful venue like the Town Hall. It’s much more amazing to be in it. I thought I’d give you some behind the scenes snippets.

Firstly, view from the choir. From where I was sitting I had a terrific view of the harpsichord, I’ve never seen one up close before. Because I’m living in the future, when the Muffet asked what it looked like, I could show her exactly, it looked like this: 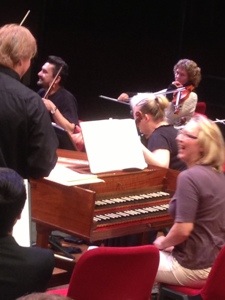 We had hundreds of guest singers to bump up our numbers from our base of a measly hundred to a massed choir of over five hundred, so we made many new friends. The tenor sitting next to me had a score written in sol-fa notation, something I’ve never seen before. It looked like shorthand. It looked like this: 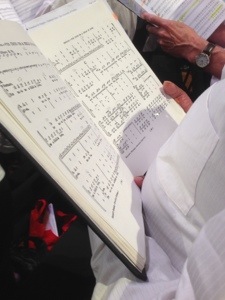 You learn something new every day.

I’m endlessly fascinated by our soloists. The orchestra are fun too, but you tend to focus more on the soloists by the nature of what they do. I was particularly entertained by the bass, who looked about fourteen. When I came in from lunch the alto was rehearsing and the bass was sitting on a chair beside him holding onto his knees and looking like he was trying not to vomit. The impression of youth was strengthened by the tailcoat he appeared to have borrowed from his dad. And yet the voice that came out of this red headed round faced infant was strong and vibrant, and while singing he seemed to be having the time of his life.
Then there was the alto. He has sung with us many times before and I’m always delighted by him. He’s a chunky Chinese guy with a shaved head and a goatee who looks like he’d slip a knife into you, steal your wallet, knock off your phone and use it to reprogram the Pentagon to delete Taiwan. Yet he sings like an angel. The Muffet tells me that an elderly lady sitting near her exclaimed “he sings like a girl!”. Of course, he doesn’t, male altos have a sweet unearthly quality to their voices that is richer than the female alto, alas. Here he is rehearsing: 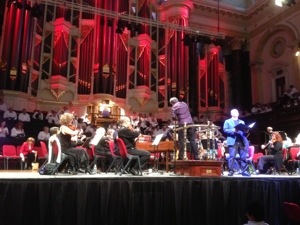 The young tenor soloist was much better behaved than tenors usually are, despite the filthy looks our conductor was giving him for not keeping an eye on the timing. I especially warmed to him after the show. I was writing him a cheque (I’m the treasurer) as he was disrobing backstage and I offered to tuck it into his waistband, which he thought was a terrific idea. The perks of being on the committee.
Of course the soprano was lovely too, but I have nothing amusing to say about her, our sopranos usually cause us no dramas at all.

My fantasy that the alto soloist will sprain a tonsil at the last minute and I’ll be plucked from the choir to sing “A Man of Sorrows” to great acclaim didn’t come true, again. Not that I would be picked anyway, especially as the young lady singing on my left used to be a professional opera singer, but one can dream. The whole thing went off without a hitch, and I managed not to sob when the whole audience rose to sing the Hallelujah Chorus with us. Nobody noticed the soprano and the orchestra coming in at different times to one of her solos. The first violinist managed not to crack up too badly after putting in about eleven extra trills at the end of one piece and nearly giving the conductor apoplexy. The extremely enthusiastic tenor behind me was drowned out by the more practiced voices in front of him. A wonderful time was had by all. You should have been there.