The cupboard is bare, so what shall I make? I know, raspberry slice. But I’ve already blogged about that, so lucky for you I’m also making orange and poppyseed friands at the special request of the Horror who very kindly didn’t give his piano teacher a nervous breakdown yesterday. It makes a nice change not to have to reconstruct the poor man before sending him on his way.

Friands are based on almond meal and icing sugar. You can get almond meal at the supermarket most of the time, but sometimes you find that only slivered almonds are available, and then only in a one kilo bag. You take them to the checkout and spend some quality time noticing that the pink lady behind you seems to not only have applied her own fake eyelashes, but to have actually made them herself out of what appears to be black cotton and hairspray. These are harsh economic times, my friends.

You can convert your slivered almonds into almond meal quite easily with the cup attachment on your stick mixture. At least, you could if you hadn’t fractured it while trying to convince it that it was just as good as a Thermomix. Failing that, a blender will also do an adequate job, though the resulting meal won’t be as homogeneous as one would like. It’s OK, though, we’re not making macarons.

With your fingers, mix in a bowl the dry ingredients. These are one cup of almond meal, one and two thirds of a cup of sifted icing sugar, three quarters of a cup of plain flour, half a teaspoon of baking powder, the shredded zest of two oranges and a tablespoon of poppyseeds. Mix in five egg whites, then 125 grams of melted butter. You can then spoon the mixture into very well buttered and floured friand tins, or make life easy for yourself and use paper muffin cases. These don’t rise very much, so if using the friand tins you can fill them nearly all the way up so they do that cute little break in the middle as they rise out of the tin.

This is the only flavoured friand recipe I’ve found (Donna Hay again) all other so called flavours just have bits of fruit piled on top. The flavouring has to be dry not to mess up the recipe. I guess you could use dried fruit, but isn’t very friand like. I’m working on a pistachio one, but the Horror thinks I have a way to go. It’s tricky, because every time I buy shelled pistachios they get all eaten. You can also use three eggs instead of five egg whites in this recipe, it’s a little richer. You could use other citrus zest too, but not lime, whenever I use lime zest it goes all brown and chewy. 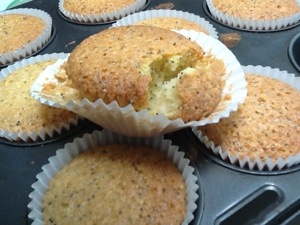