When your sister leaves a bag of elderly bananas hooked onto your front door handle, your first impulse is to make some banana bread. But I’ve had an idea fermenting in my head since my friend Kath suggested adding condensed milk to my strawberry sorbet recipe, and now was the time to try it out.

First, a passing mention of the strawberry sorbet. I have discovered, in my attempts to replicate the effects of a Thermomix with items I have lying around, that my blender can’t really crush ice. Nor can it cope with frozen strawberries. However, if you let the strawberries thaw out, then blend them with the white of an egg and fifty grams each of icing sugar and condensed milk, you get an even better sorbet than the one I had a go at a few weeks ago.

Here’s what I did yesterday. Place in a blender the remains of two bananas, the juice of a lemon, a teaspoon of cinnamon and about a third of a can of condensed milk (I realise this isn’t SI units, but I was on a roll and forgot to weigh it). Blend. Freeze. 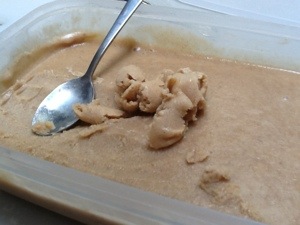 It’s amazingly creamy and has a very intense banana flavour, too much for the boys who will only eat banana in cake form. I don’t think you’d actually call it a sorbet, but it isn’t an ice cream either.
It will be up to the Muffet and I to finish this batch. I think it would be even better done in those plastic ice block forms you can get. The Muffet also suggests dipping them in chocolate, which is a very fine idea.

I did also have enough for banana bread, but that’s a whole other blog.