I think I just wanted an excuse to turn on the oven today. I am having a hard time reacclimatizing. Maybe in twenty years time I’ll be one of those bleached blonde leather bags sitting on the Esplanade in Cairns sipping shandies. That conflicts a little with my plan to be a velvet clad cat lady, but I’m sure I can work something out.

I’m having a hard time getting something filling in my kids’ lunch boxes. They’ve all gone off sandwiches recently, the Horror was never into them at all. The Moose has access to a microwave at school, so he sometimes takes pasta. I’m sure they’d all like to eat just cakes and biscuits, but we’re not having that. Moderation in all things. I thought I’d give breadsticks a go.

The recipe is taken from a very learned tome called the Cook’s Book, and has detailed instructions on many complicated recipes you wouldn’t make in a pink fit. It has an excellent bread chapter, so I went from there. This is half the recipe they give, I wanted to make sure they’d get eaten before I went overboard.

Dissolve 5 grams of fresh yeast in 180 grams of water. I have one of those scales that you sit your bowl on and zero after putting in each ingredient, it’s revolutionized my cooking. My hairdresser made me buy it, that man has far to much influence on my behaviour. I get fresh yeast from my local IGA in little cubes, you might have to ask around at the deli’s in your area. Or you could use dried yeast, I’m pretty sure it converts to half a teaspoon.

Add 250 grams of flour. Mix it into a fairly wet dough with your hands, then leave it for about ten minutes. When you come back, sprinkle some salt over it, add a glug of olive oil and knead it a bit. Because I’m not making a soft, fluffy loaf of bread, I added another handful of flour to make a stiffer dough. Knead it until it’s smooth. The instructions then said to roll it out to one cm thickness, but I found it soft enough to spread it out with my hands onto a floured bread board. They also add that this is where you get finicky with a ruler and a sharp knife to get nice even sticks. 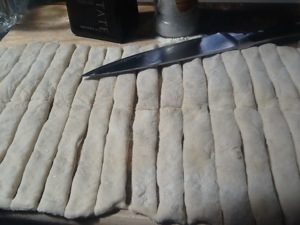 I’m actually going for lunchbox size and I favour the rustica look, which translates as frankly, my dear, I don’t give a damn how they look, so that’s what my cutouts looked like. You can now roll each stick to get the traditional shape, or just lift each rectangle onto a biscuit tray that has been lined with baking paper and sprinkled with cornmeal. You then leave them to rise for the time it takes to rescue the washing from a sudden rain shower and pay a conductor and a rehearsal pianist for a month of work. Bear in mind that I also had to calculate superannuation. Spray them with more olive oil and sprinkle with salt. If you do it the other way around you just blow the salt onto the splashback. Put them in a 180 degree oven for about thirty minutes, but keep an eye on them. I like them fairly brown for extra crunch, you may like to leave them in for less time for a more bready result.

I do like the result, they’re like very miniature loaves of bread. I think if I’d made them a bit thinner they’d be crunchy all the way through, but this lot has a chewy centre. They’d be really good for dips, they don’t shatter.

I put the apple in there so you could see the size, not to be artsy fartsy. But will they pass the ultimate kid test? And can I be bothered making them regularly if they do? It’s unlikely, I have a very short attention span.