The Horror has decided that I’ll be reproducing his favourite cafe treats. We’ve succeeded with the pistachio friands. The chocolate chip biscuits still need work, but are acceptable for the moment, especially as the cafe up the road from school has started stocking them again. How about Viennese shortbread then, hey? And what about baklava?

I have a phobia of filo pastry so no baklava for the foreseeable future, but Viennese shortbread seems doable. I’ve never understood why people like it, it’s two stodgy biscuits sandwiched together with some red flavoured plastic and dipped in dubious chocolate at one end. I think it’s because I keep a fairly close eye on the Horror’s chocolate intake, he can pretend he’s eating a biscuit, when he’s actually in it for the chocolate.

I found an excellent recipe which worked perfectly, a bit unusual for the net. It is this. Cream together 220 grams of butter with 55 grams of icing sugar. I highly recommend the Pepe Saya butter for this recipe. Go nuts with the creaming, you’ll probably need a machine for this. I will eventually review the KitchenAid, just hold your horses. Cream in half a teaspoon of vanilla essence. Mix in (gently does it) 55 grams of corn flour and 170 grams of flour. Let it rest while you go and mark up the attendance records for your choir. Now comes the tricky bit.

Have a think about Viennese shortbread. It has a distinctive shape that can only be produced with some kind of piping arrangement. Knowing this I popped out this morning and purchased a syringe style piping mechanism. It only had icing nozzles, rather than batter nozzles, but it looked as though it would do. I loaded it up with the very soft dough, it really was almost a batter. The wretched thing disintegrated almost immediately. Look. 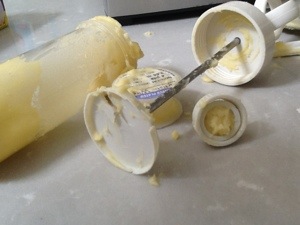 Utterly useless. But I had to find a replacement for the plunger, that batter needed piping and I had a coffee date coming up. I looked around the kitchen for something that might fit into the barrel. Tiny schnapps bottle, no, rolling pin, no, dogs ear wash, no thank goodness. Off to the beading table. Aha! Empty spool of artistic wire fit perfectly, you can see it behind the torn plunger in the photo. I had to push it down with my muscular thumbs, but it worked a treat. Because it was an icing nozzle I had to lay down a triple width to make a nice sized biscuit. 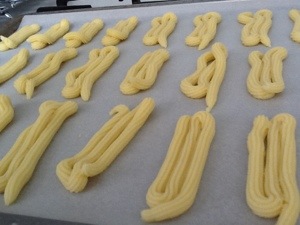 Bake those at 160 degrees for fifteen to twenty minutes, or until pale golden in colour. While they were cooling I dashed off an opprobrious email to the distributors of my self destroying syringe. They emailed back almost straight away saying that such a thing had never happened before in the illustrious history of their company and I should return it straight away for a new one which would most certainly not collapse immediately on me. Hah.

Anyway, when the biscuits are cool, get out some jam. Not fancy stuff, you want a smooth thin layer. Also melt some chocolate in a heatproof bowl over boiling water. Jam pairs of biscuits together. The dip the end in melted chocolate. Very gently. These biscuits are fairly delicate, you may want to spoon the chocolate over them. Place them back on the baking tin and stick them in the fridge to harden the chocolate. 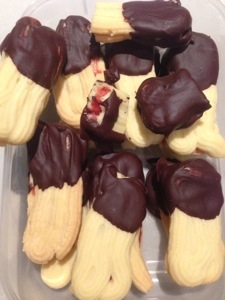 They may look like the Viennese shortbread you get in cafes, but they are so so very much better.