My parents-in-law are taking the Horror from Outer Space for the weekend, and to express my extreme gratitude I’m making them gingernuts.  Old fashioned ones that’ll crack your dentures unless you dip them in tea.  Not that they wear dentures.  Poppa loves gingernuts, Nanna still suffers from vestiges of a harsh Protestant upbringing that causes her to regard food as fuel and not something to be enjoyed, but she does like the idea of home cooking and for everyone to be happy, so that’s good enough for me.

My recipe is based on the one in 1970 edition of the Women’s Weekly cookbook that I’m sure every Australian household still has.

In a saucepan melt 100 grams of butter with a tablespoon of golden syrup.  I sometimes wonder if I should look for a fancy pants alternative to the CSR version I use, since that’s the direction I seem to be heading in, but it has a distinctive taste.  Lyle’s golden syrup is completely different.  I’m sure you could use it, but it’s a lot more effeminate tasting.

In a bowl mix together one cup of caster sugar (don’t go messing with brown sugar in this recipe, they won’t be as crunchy), three teaspoons of ground ginger, one teaspoon of mixed spice and an egg.  By this time the butter should have melted, so toss into it a teaspoon of bicarbonate of soda and stir it up to make it fizz.  I don’t think this is an essential instruction, but I like it.  Tip the butter mixture into the sugar mixture and mix it all up.  Add two cups of flour and work it in.  It’s a pretty stiff dough.

Pinch walnut sized bits (in their shell, not out) of dough and press them round in the palm of your hand.  You can put them fairly close together on your lined biscuit tray, they don’t spread a lot.  Bake at a hundred and eighty degrees until they’re really quite brown.  I was going to time them today, I can tell you that I put them in the oven at exactly 11.56am, but then I started looking at Facebook, and there was a Melbourne Cup lunch going, and you know, some time later my nose said to me I think they’re done now. It may have been twenty five minutes.  Anyway, you don’t want to burn them, but for that brick like consistency you need them pretty brown. 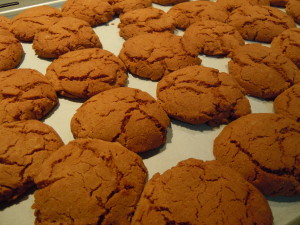 So I think these should go some way to expressing my thanks, and take their mind off the fact that the Horror is going through their house like a swarm of ants eating everything he can find with sugar in it.