Newtown, I’d love shopping in you a lot more if there was somewhere to leave my car. Yes, I should catch the bus, but some of us haven’t got all day, you know. Kids to drop off, kids to pick up, washing to hang out, afternoon tea to produce, update my resume. Just in case.

It didn’t help that a whole block was taken up by what appeared to be a film rig in front of the Newtown Hotel. I wonder if the neon sign Smokes and Pokes was there for the filming, or if it’s a regular fixture? One never knows in this neck of the woods. You can also never pick who might be a film extra and who’s just a local. Girl with pink hair? Guy with a forked beard? School kid with dreadlocks? I’m going with local for all three.

Any trip to Newtown starts with a pilgrimage to Campos Coffee. Not one of those ones you see springing up all over the place. The original and the best. 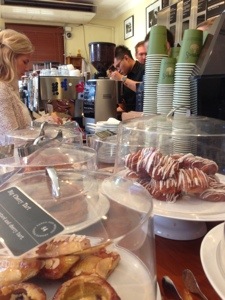 Though I didn’t find it had its usual effect of taking the skin off my throat and causing my ears to ring. Perhaps they’re watering it down. It was still rich and satisfying.

I was going to make my first stop Pentimento, but they had a snarky sign up saying don’t you bring that coffee in here you clumsy plebeian. So moved on to the marvellous Elizabeth’s Bookshop where I found the girl with whom my sister has had her longest friendship. See what I avoided there? Rachel Ann (not her real name) was busy in the dark arts of the second hand bookseller, sanding the edges of the yellowing books, risking her health with the older ones that have been impregnated with arsenic, and polishing them with Spray’n’Wipe. Where’s the mystique? I chewed the fat with her a little and exchanged pleasantries with her colleague Roger, a very cute little black doggie. More shops should have doggies in them. I’m only looking for two things in second hand book shops, early editions of Wodehouse and elderly cookbooks. I struck gold, there was a facsimile copy of the 1902 edition of Mrs Beeton’s book of Household Management for a very bargain price. Who would let go of such a thing?

Rachel Ann said “if you like that, check this out”, hauling out from behind the desk an ORIGINAL of the thing, massive, dusty and leather bound. Laid by at three hundred and fifty smackers. I’m glad I didn’t have to choose whether to buy that.

I had to move on because my actual motive for visiting Newtown was to get some inspiration for the Horror’s birthday present. Putting together all of the things he likes, he is actually into steam punk without knowing what it is. He has a fob watch and a little brass folding telescope. Rachel Ann suggested Monster Threads for steam punk, and a very fine shop it is too. I really liked a lot of the clothes in there and there was certainly a steam punk aesthetic among the adornments but they were more for girls. And adults.

So on to Pentimento. I was rather tempted by the sealing wax and seals, but the Horror doesn’t write letters. He should, his great grandma would love some, but he can’t get past I’m fine, how are you? They have gorgeous cards and wrapping paper, soaps and lotions, a basket of Fair Trade string.

Not sure what you’d do with that, possibly tie up the top of your homemade marmalade with a piece of Japanese paper to be a whole lot more Inner West than the passè brown string and gingham. They also have ironic homewares and a selection of glossy books, some of which make me think that the local milieu has changed somewhat since the time that I lived here. 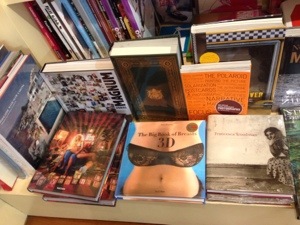 I ended up getting some organic washing implements. 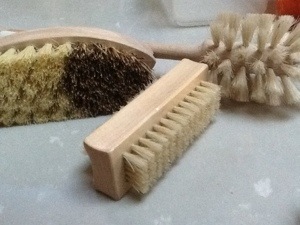 The one that looks like a toilet brush is for the Thermomix, the lenticular one is for scrubbing potatoes and the nail brush will look lovely on the side of the new bath even after removing chunks of soccer field from the Horror’s knees. Then I saw another snarky sign warning mummy bloggers not to take photos, so I slunk out.

My parking time was up, even though there was much left to explore. I reluctantly betook myself to a soulless mall at which I purchased a size twelve waistcoat with a pocket for the Horror’s fob watch and one for his rather unsatisfactory plastic monocle. That’s a start. He’s been wearing a waistcoat that my mother bought for herself in 1983 and has been complaining about the lack of pockets. I wonder where you can buy top hats?

A good housewife takes care of her health, because who else is going to make dinner? For me, this involves getting myself along to the Sydney Melanoma Unit every six months to get my skin looked at. The Melanoma Unit is situated next to a large teaching hospital, which adjoins the city’s oldest university, which is down the road from a busy and popular shopping strip. You may think that these facilities may warrant some extra parking around the place, but this is Sydney, so you would be wrong. You may also think that I should hop on a bus to get to my appointment, but once again, no. In the time it would take me to get from my house to the Melanoma Unit by bus I could jump in my car, drive to Glebe, purchase two rubber chickens, drive to a suburb adjoining that which the hospital is in, walk to Campos Coffee (the original, not the many franchises which have sprung up around the place), purchase a large skim flat white, walk to the Unit and still have fifteen minutes spare.

I spent that fifteen minutes enjoying my coffee while sympathizing with the lady at reception who was dealing with an elderly patient who wasn’t happy with her bill or completely convinced that she should come in for her next appointment. At one point she was waving a fistful of shopper dockets. The receptionist was incredibly patient, going through every item, drawing her a map of where her next appointment would be, even holding her hand and telling her not to worry. One of the many many jobs I would be very poor at.

I think the coffee at Campos has changed. It’s still full of the quiet authority that makes my kidneys wriggle, but was a little smoother than usual, failing to take any skin off the back of my throat. I think I prefer it to the original.

The appointment itself was mercifully brief. I strip down to my Victoria’s Secret underwear, the doctor gets out a bright light and a magnifying glass and examines every mole on my body, then squeezes various bits of my lymphatic system. I never know what to say on these occasions, not being skilled at small talk at the best of times, and I’m further stymied by her thick French accent, so I smile and say yes a bit and try not to think of Inspector Clouseau. A rubber chicken may have broken the ice, I should have brought it in.

I’m all clear again and have no further lumps or bumps than I should have. I give them a vial of blood and farewell them until next Easter. I resist the urge to spend some quality time in King Street because I have to get home and make more breadsticks, they were a huge success. 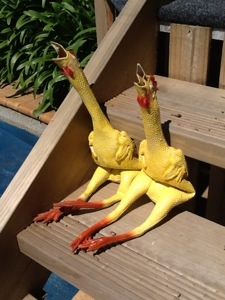