Skip to the Louvre, My Darling

It was great weather for ducks today.

So we went inside, as I had cleverly planned, having kept a careful eye on the weather forecast. The Louvre is almost as close to our apartment as Notre Dame, so it is almost possible to skip there. Our plan was to see five famous things, then wander aimlessly about. It is a plan that has served us well in the past.

First up was the Venus de Milo. Here is what the poor woman has to put up with every day.

If she had any arms she’d be all like…

A least she doesn’t have Chinese tourists taking photos of each other fondling her willy, as a statue earlier in the hall was suffering.

And here’s a painting we saw in another gallery, on the ceiling actually, of her discovery. I wish we could still fly. Perhaps you have to be naked. 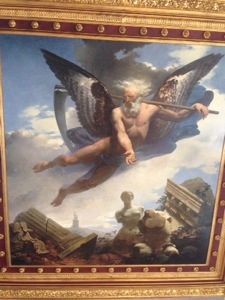 Further along we saw busts of, reading right to left, Socrates, Aristotle and Plato. I don’t know who the one on the left is.

I like the busts, they look like portraits, not like most of the Greek and Roman statuary about the place that’s all about their gods. It’s like you can say hello to these ancient thinkers.

We then followed the tourist hordes to see the Mona Lisa and I was once again underwhelmed. At least, being winter, we could see her up close, I have memories of her being about postage stamp sized. I think because so many of the paintings around her have been restored and are bright and vibrant and also by masters of the art that she suffers a bit. Opposite her is the Marriage at Cana, of which I have also not taken a photo and seriously that thing is enormous. You pretty much have to lean up against La Gioconda to take it all in. It was pinched by Napoleon from Venice, and he had to cut it in half to transport it, then have it sewn back together. I liked it a lot.

We rambled through some biblical stuff pretty quickly, we’d had a lot of Giotto on Italy. This one intrigued the Moose and I, the saint appears to be flying an angel like a kite. 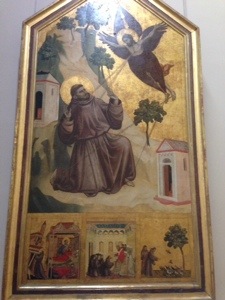 We were always pleased to see St Sebastian, always looking fairly resigned to a little peeved to find himself full of arrows. We got in to the Delacroix area fairly quickly, and the Moose made me take a photo of his famous pick.

Delacroix witnessed the Paris uprising in 1830 and was moved to paint it as an allegory of Liberty leading the people, but apparently now it’s an internet meme. C’est las vie.

I do always love the small stuff we see along the way, like this mini mosaic around a fireplace in the hall housing the Crown Jewels. 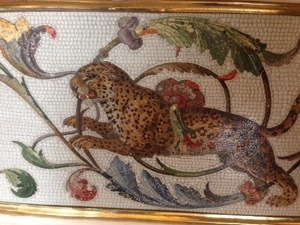 Here’s one of the royal teapots, carved from semiprecious stone. No wonder the citoyens were annoyed. 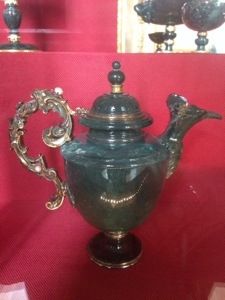 We moved into a Middle Ages statue area, where there seemed to be a bit of an obsession with death. Perhaps because so much art was commissioned on the occasion of people’s deaths. 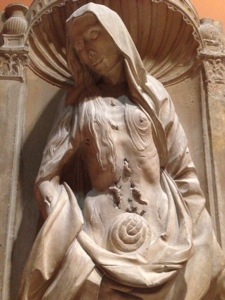 Muffet was annoyed when the Moose started intoning “Pié Jesu Dominé. Dona eis requiem”. I don’t know how he could help it, actually, I nearly did the same myself. So we went to find her pick, chosen from the Louvre website.

He’s an Egyptian scribe, and looks fresh as a daisy, ready to take down your every word as he has been for the last four thousand five hundred years. Almost as old was my pick, the stele upon which is inscribed the Code of Hammurabi, one of the oldest lengthy pieces of decoded writing in the world. It was a code of law written in the Akkadian language, and such stones were set in major towns so that all should know what the law of Hammurabi was. On the back of the stone is a depiction of the sun god handing the laws to Hammurabi. You can’t be thought to be making these things up by yourself.

We saw a copy of this in the Pergamon museum and it did look very similar to the original. But I like to know I’m getting the real deal.

It was a big day, but the last of the museums and what a one to finish on. It was fairly cold and sleety outside, so I knew what they really wanted was a long walk to what everyone tells me is the best icecream in Paris. 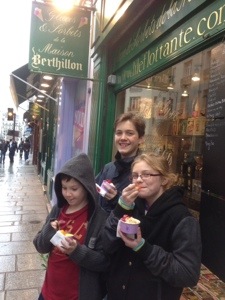 No lines here, but a very difficult decision re flavours. I got figue, a rich pink seedy scoop of divinity, very pleased I didn’t stick with my usual raspberry. Glad I don’t live here, I’d be broke and fat very quickly. Although, what with being a flaneur and all, possibly just broke.