It turned out fine in the end, though it was touch and go for a while. There does seem to be an infinite amount of permutations to the banana cake recipe, but this one was a bit further out than most and I lost concentration half way through, as you do. It’s another one from the Black and White cookbook. I can sell you one if you’d like.

The Muffet only likes to eat bananas in company, so we have a surfeit of them from when the German girl came to stay. This morning I had six small spotty bananas, each with a halo of vinegar flies, begging to be put in a cake. I thought to myself, I thought, I’ll do a nice healthy banana loaf with half of those and something fancy with the other half.

The something fancy is a banana, raspberry and almond cake. The recipe suggest a bundt tin, but honestly, who has one of those? Well, I do actually, but I’m going to be making these in muffin form. Stuff gets a lot more eaten in muffin form.

You start off by creaming 200 grams of butter with a cup of caster sugar and a teaspoon of vanilla extract. Add a couple of eggs, beating after each addition. Stir in a large banana, or two small bananas in this case, and a half a cup of sour cream. Or some leftover creme fraiche from last week’s Thermomix demonstration and some accidental light sour cream. Stir in two and a half cups of flour and half a cup of almond meal. What you should do at this point is also stir in five teaspoons of baking powder to make up for the fact that you don’t use self raising flour. Or you could just proceed to folding in a cup and a half of frozen raspberries. You have quite a stiff dough at this point. And I would recommend folding them in, don’t try using the KitchenAid.

I got to the point of spooning them into the paper lined muffin tin before realising I’d left out the baking powder. So I heaved a deep sigh. And spooned in the baking powder. Of course with the raspberries already in there, you start breaking them up a fair bit when you mix that in. You could try cursing a bit. I didn’t find it helped, but it relieved the tension a little. Not as much as eating a handful of chocolate bits did.

Spoon the mixture into lined muffin tins, I got eighteen out of it. Bake for about half an hour at 180 degrees. Notice halfway through that black spots are appearing on your muffins. Google fruitlessly for a bit. Decide to make sure they brown quite a lot. I’m guessing it was due to improperly mixed in baking powder, but I’ll never know for sure. The browning certainly helped, but they weren’t the most attractive things. 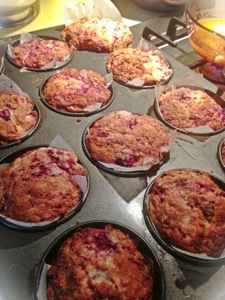 I thought about icing them, but they were fairly strongly flavoured already. A dusting of icing sugar while still hot covers a multitude of sins. I do this by getting a chunk of icing sugar and rubbing it on a sieve over the muffins. 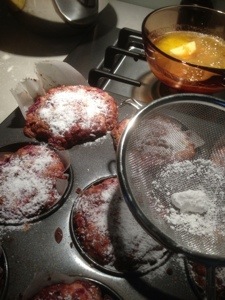 I thought seriously about firing them from the event I’ll be taking them to tomorrow, but then I tasted one. The least attractive one. Rich, moist, delicious, what a flavour combination. The icing sugar on top had formed a crunchy crust. The Muffet ate two before I could wrestle them away from her. That’s going on my deadly sixty. Hang on, wrong show.