I’m attending a conference in Waikiki, like a real adult with a job and one and a half research papers to present. I think I’m chairing a session too, don’t know how that happened, will have to clear that up when I get there. Because the dear children are much bigger now and only really need me to taxi them about (the Horror even cooks dinner every night, except for the nights when he just hovers about making snide comments about my cooking), I thought I’d take some extra days and take a dekko at the Volcano.

It turns out that possibly the worst time to visit is when the Volcano is doing its thing. As it currently is. Having said that, I am still having a volcano experience, just not the one I had planned.

I’m staying in a rickety shack with shared bathrooms called Volcano Hale, in Volcano Village, just up the road from Volcano National Park. The Volcano National Park is closed, there’s a fetching photo of a staff member at the museum near the entrance on their website. He’s wearing a gas mask because of the billowing toxic gases rising with the steam behind him. The highway running past the entrance has flashing signs up “Do Not Stop” every couple of hundred metres for twelve miles. There’s a hastily patched up earthquake damaged part of the road just before the village. There was a harried looking park ranger at the village markets this morning, but she wasn’t interested in moaning tourists. She was handing out ash masks and advising which roads would be closed next, and which village was about to be evacuated. There’s too much lava for the locals and it’s all a bit too serious to have to think about catering for out of towners with their eyes out on stalks.

Having said that, I have driven on the earthquake damaged highway, which is covered in volcanic ash. The haze in the air is vog, not fog. And there was a strong smell of sulphur, even with the windows up. 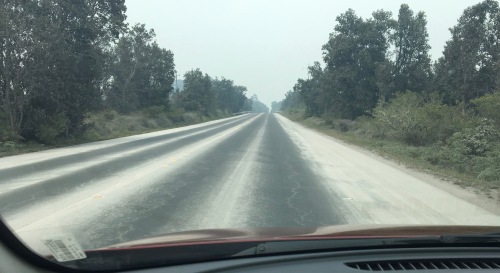 This morning I was woken at about 4am by an earthquake. Not a strong one, it just felt as though someone had kicked the bed very hard, and everything rattled briefly. There have been tiny wobbles all day. I have driven down the road at night to South Kapua Road and seen the lava fountain on the horizon. I did book a “boat experience” (apparently it’s way too rough to be called a cruise) to the lava, but that has been called off due to inclement weather. So you see what I mean.

The Big Island feels a lot like a small Queensland town, only populated by tiny Maori or Tongans, and on a volcano. I had a good look at a lava flow from the 1950s. It still looks like something out of Mordor.

So I can only imagine what state Leilani Estates will be in when this eruption settles down. They’re not going back home.

I haven’t been idly fretting though. I went to the southernmost point of the USA. Apparently what you do when you get there, is you jump off. Despite all of the signs warning of your instant death if you do so. 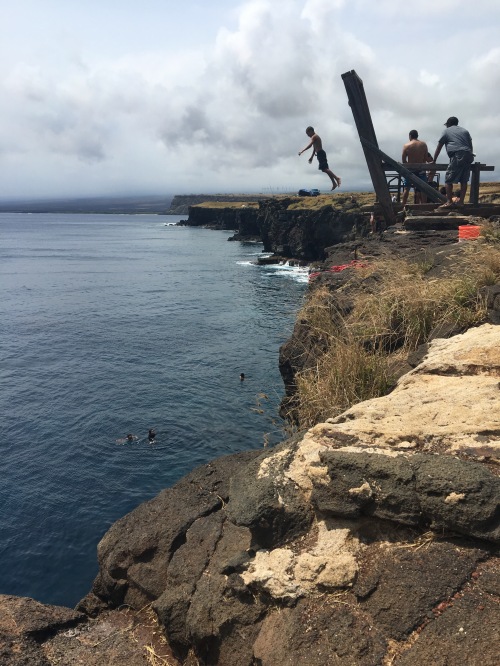 I feel that it is a very American thing to do. Like all of the chaps I’ve seen hooning about on motorbikes without helmets (though I did see one chap on a bicycle with a helmet). The man won’t tell us what to do!

There is also a black beach (a local corrected me, it’s a black sand beach). I’ve got dodgy internet at the moment, so you’ll just have to Google it. It’s just like a regular beach, except that the sand and rocks are black, and there’s a lifeguard shouting at people to keep away from the turtles.

I might wrap this one up now and move outside, that last tremor went on a bit too long and I’ve had bushfire emergency what to do training (panic and run away), and I’m wondering if earthquake training is similar. Ah, so that’s what a 5.8 magnitude earthquake feels like.

I am going to have a last ditch effort to look for lava by driving to Pahua tonight for dinner. Apparently there’s quite a good view from there of the orange glow of people’s hopes and dreams being turned to stone. At least nobody is being decapitated by a flying boulder, it’s just not that kind of volcano.