Now don’t go reading this as a recipe. I did make a meat pie. It was very good. But it wasn’t what I’d hoped and dreamed it would be.

I’ve been asked by a member of the audience about making pastry in the Thermomix. I haven’t had so much a rocky relationship with pastry as a uniformly rotten one. I suck at making pastry. So when my parents in law were coming for dinner yesterday I thought I’d make a meat pie to try out two different types of pastry in the Thermomix. I’m sorry, Christina, it was far and away the best best pastry I’ve ever made. My problem was with the insides.

First the pastry. I like a shortcrust on the bottom of a meat pie and a puff on top. To make the shortcrust you place in the Thermomix jug one hundred grams of cold butter cut into pieces with two hundred grams of plain flour and a pinch of salt. This is an ideal situation in which to use Pepe Saya butter. Zap it on speed six for ten seconds. Add fifty to sixty grams of cold water and knead on interval speed for ten to twenty seconds. Peek in through the lid, stop it when it has formed a dough mass. Haul it out and put it on your cold, floured Caesarstone bench top and gently squash it into a disk shape. I then put it in the pie dish and stuck it in the fridge for twenty minutes. And this is where my experience deviated significantly from every other time I’ve made pastry. I put the pastry back on the bench top and rolled it out and it looked like pastry! It usually cracks and breaks and is generally a pain in the neck. But this lot stayed in circle shape and even held together as I gingerly transferred it back into the by now greased and floured pie dish. 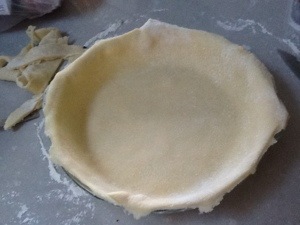 That got baked for twenty minutes, and even though I didn’t bother blind baking it held its shape.

Then I made the meat filling and wasn’t that learning experience. Normally I’d brown the meat in a saucepan and stew it in some chicken stock with two tablespoons of corn flour mixed into it. This is because my dear children don’t like their meat too flavoursome and they certainly don’t like bits of onion or carrot in it. The Horror goes so far as to say that he doesn’t like gravy either, and why can’t I just make an empty pie and stick some bits of roasted meat in there? We’ve got a long way to go with him. But now I can chop up the flavoursome vegetables into microscopic bits! So I put I the Thermomix jug a halved onion, a clove of garlic, a thick slice of fennel root, a roughly chopped stick of celery and a roughly chopped carrot. I zapped that lot, then cooked it at a hundred degrees for seven minutes with a slice of butter. I then put in five hundred grams of diced chuck beef, half a cup of chicken stock and two tablespoons of corn flour. What I should have done was brown the meat first. And possibly used red wine instead of stock. I cooked that at ninety degrees on speed slow with the blades in reverse for fifty minutes. The result was delicious but extremely visually unappealing. Also way too much gravy. I drained off most of the gravy and have it in the fridge until I can work out what to do with it. Just look at that colour.

No good at all. The specks on it aren’t mould, it’s leftover flour, really it is.

Emboldened by my success at the shortcrust pastry I made half a recipe of rough puff pastry. I put in 125 grams of plain flour and zapped it with the turbo button a couple of times to aerate it. I added in 90 grams of cold chopped Pepe Saya butter, a pinch of salt, fifty grams of cold water and a good squeeze of lemon juice. The recipe suggests using half lard, but I don’t happen to have any. I wonder if there are different grades of lard, like there are for butter? From the stuff scraped off the abattoir floor all the way up to the results of Kim Cowdashian’s latest liposuction? Something to investigate. Anyway, set the dial to the closed lid position and knead for ten to twenty seconds on Interval speed, once again peeking to see when it forms a dough.

Extract the dough and slap it onto the floured bench top. Pat it into a rectangle shape. Possibly refrigerate it for twenty minutes at this point, but I didn’t. Roll it out until it’s about 40 by 12 cm. That does seem a bit specific, doesn’t it, so maybe just long and thin. Fold the bottom third into the middle and the top third over that. Rotate it through ninety degrees and roll it out again. Repeat the folding and rolling three more times. Refrigerate it again before rolling it out into circle shape. I didn’t, as it was still fairly cold and I had a pie to get in the oven. I spooned the gravy less beef into the shortcrust base and lifted the rough puff circle onto the top where it settled nicely. I poked some holes in it and baked it for about twenty five minutes.

I forgot to photograph it in the excitement of grandparents, but here’s the last scraps of the Muffet’s bit if you’d like to see how great the pastry looked.

There was none left at the end of dinner, so it can’t have been too bad. Definitely needs work, but. That pastry needs an amazing filling to do it justice.