It’s fresh, it’s home grown, it’s possibly organic, it’s a bag full of backyard oranges. I do love being gifted raw ingredients, so how could I knock back a bag of oranges. A very large bag, full to the brim of thin skinned, sweet, juicy, I’m guessing Valencias. We have eaten quite a lot of them. Some of them went into an orange and passionfruit syrup. Some of them succumbed to the blue green algae. But I still have a bowl full left, and I’ve always wanted to try an orange and almond cake.

There’s actually a recipe for it in the Thermomix cookbook. I’m deeply suspicious of most of those recipes, even more so as this one claims to be fat free. What a lot of nonsense. It contains 250 grams of almond meal, it isn’t even slightly fat free. So I compare it to the orange cake recipe in the Stephanie Alexander Cooks Companion, and it looks fairly believable despite having only half the eggs. Here’s what I did.

Take two large, or three small oranges and bung them in the Thermomix steamer basket. Stick a litre of water in the jug and cook those babies for forty five minutes at Varoma temperature on speed three. The Stephanie Alexander recipe suggests gently boiling them for two hours, so I’m quite glad I’m not doing that, given my attention span. I’m quite capable of going out to buy cucumbers and returning to find my kitchen a smouldering ruin if I did that. See, I’m saving money with the Thermomix. 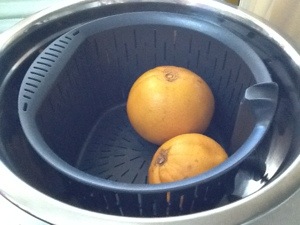 They’re very soft after forty five minutes, I’m happy not to cook them further. You’re supposed to cut the oranges open at this point to hunt for pips, which I dutifully do and don’t find any. Bung them into the emptied jug and add on top 250 grams of almond meal, 250 grams of sugar, a teaspoon of baking powder and some eggs. The Thermomix recipe says three, Stephanie Alexander says six. I compromise on five, as that’s how many I have left in the box. See how full the jug is, yet when you zap it on speed seven for twenty seconds the oranges are pulverised and the whole lot is completely mixed. 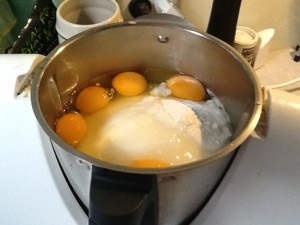 Pour it into a lined cake tin and bake it at 180 degrees for forty five minutes to an hour. The skewer test doesn’t really work on this type of cake, so when I pull it out after fifty five minutes for a sample it’s still fairly damp inside. Or moist, if you prefer. 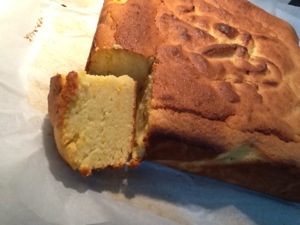 From what Stephanie says, it should be, but I’d rather it wasn’t. I put it back in the oven for another half an hour on 150 degrees and do actually go and buy cucumbers. It’s certainly dryer inside when I get back.

I do like the flavour, but not so sure about the texture. I might try reducing the eggs next time. Or possibly adding some flour and more baking powder. I’d like it lighter. But for there to be a next time, this one needs to be eaten first. Lucky it’s fat free.